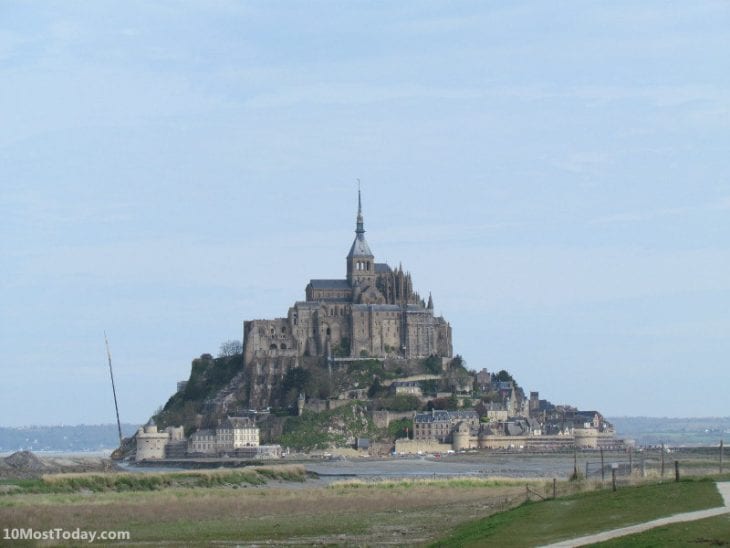 Normandy in a region in western France. For many of us, the first thing that comes to mind is D-Day and the second world war, and movies like Saving Private Ryan or Spielberg’s mini series Band of Brothers. That crucial part of history that took place on the shores of Normandy is very noticeable and remains from the battles, monuments, cemeteries and museums can be found everywhere in the region.

But Normandy has more to offer than just war memories. Visit man-made landmarks like Mont Saint Michel, natural landmarks like the cliffs of Étretat, and don’t forget to try the region’s trademark drink – Calvados, which is an apple brandy. All those and more await you just a few hours drive west to Paris.

Before you is a list of the my recommendations to Normandy. I first listed the attractions that aren’t related to D-day and the war, and then the monuments and point of interests that are. Each of these D-day sites will reveal to you another part of the story of the largest seaborne invasion in history

1. Mont Saint Michel – I previously mentioned Mont Saint Michel several times: in my posts on the world’s most beautiful castles, the post of amazing UNESCO cultural heritage sites, and more. Mont Saint Michel is a small rocky tidal island located approximately 1 km off the coast. The island’s highest point is 92 meters (301 feet) above sea level. The population of small island is only a few dozens, but more than 3 million people visit the island and its castle each year. The strong tides in the area change quickly, and connect and disconnects the island from the mainland on a daily basis. No visit to Normandy is complete without visiting this marvel 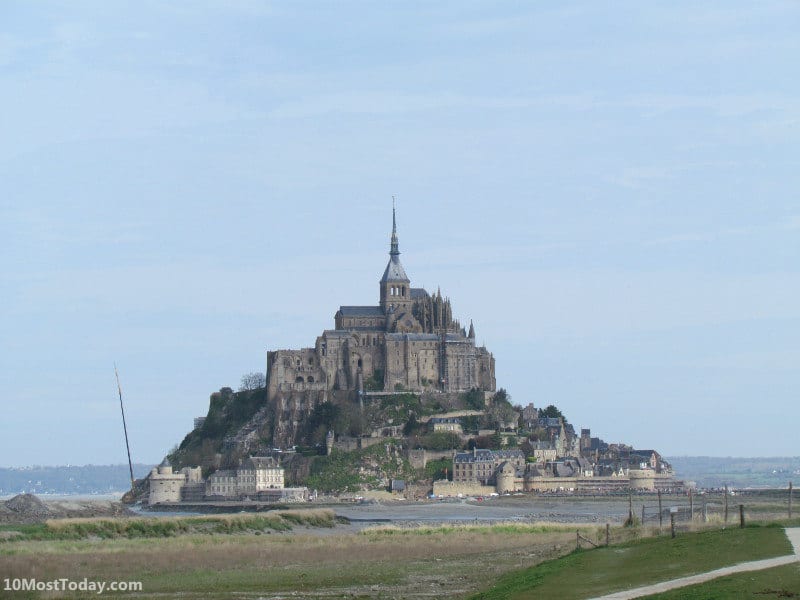 2. The Cliffs of Étretat – Étretat is a small coastal village best known for its white chalk cliffs, including three famous natural arches. Two of them can be seen from the town, while the third and largest requires a walk at low tide. These spectacular cliffs attracted famous artists such as Eugène Boudin, Gustave Courbet and Claude Monet. The arches even appear in some paintings of Claude Monet. I mentioned these cliffs in my posts on beautiful natural arches and incredible sea cliffs 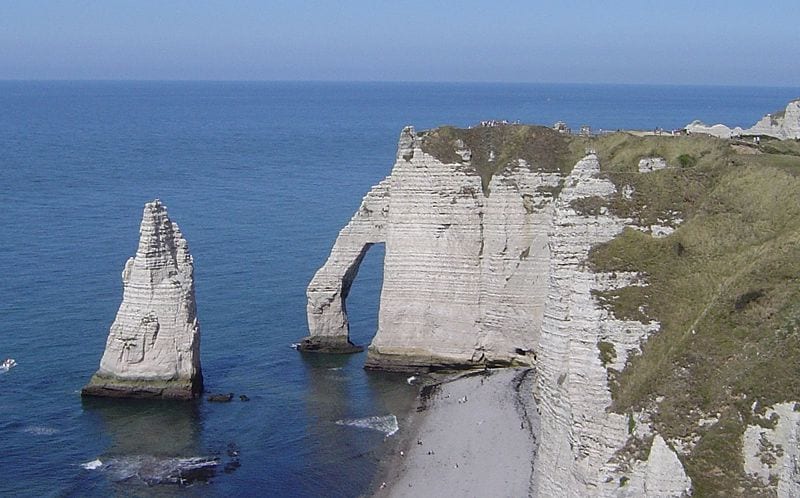 10 Best Attractions In Normandy: The Cliffs of Étretat

3. Bayeux and Bayeux tapestry – Bayeux is a beautiful town established as early as the first century BC. The city is a major tourist attraction with a wonderful historic center and a remarkable cathedral. But the main attraction is without a doubt the world famous Bayeux tapestry. The Bayeux tapestry is an embroidered cloth nearly 70 meters (230 ft) long and 50 centimeters (20 in) tall, made to commemorate events in the Norman Conquest of England in 1066. This remarkable artifact consists around 50 different scenes and is truly an impressive work of art. The tapestry is on display at the Bayeux Museum. Click here for the official site 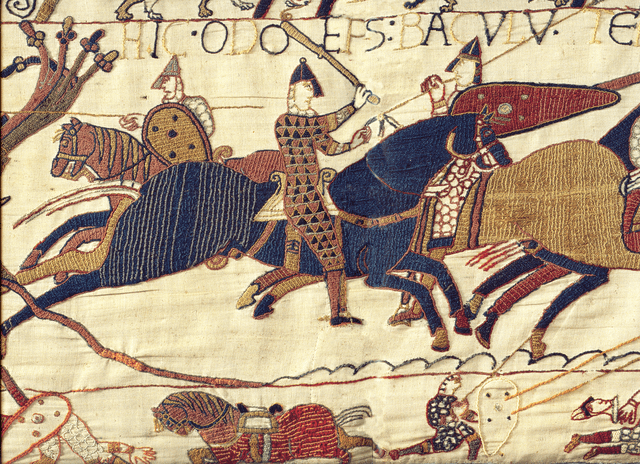 A small segment of the whopping 70 meters long Bayeux tapestry

4. Claude Monet’s House and Garden, Giverny – Giverny is best known as the location of Claude Monet’s garden and home. Monet moved to Giverny in 1883, at the age of 43, and began developing the garden in the property he purchased. He painted his garden, and specifically the lily ponds and the Japanese bridge in many of his later paintings, so visitors to the garden who are familiar with Monet’s work will no doubt recognize the beautiful garden 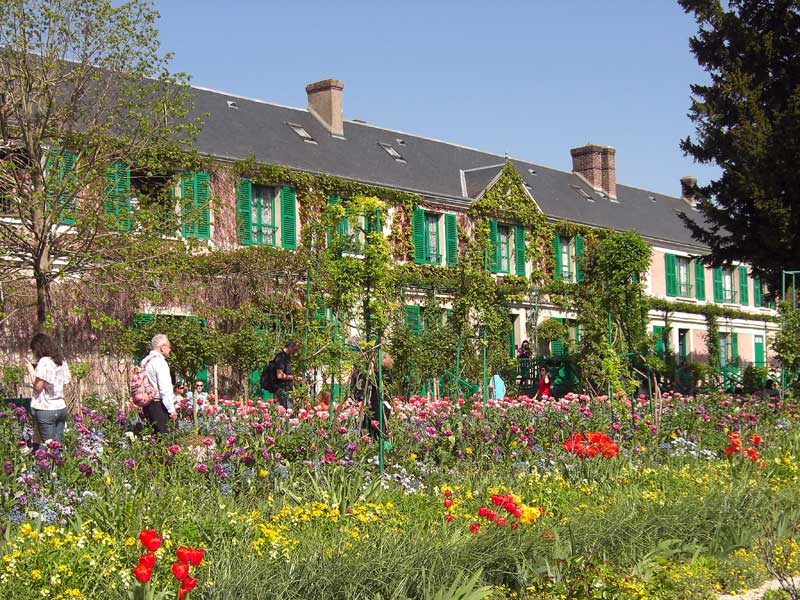 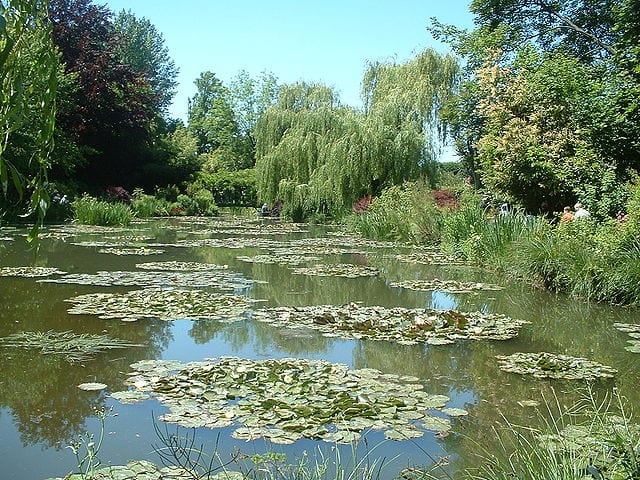 5. Rouen – The main attractions in Rouen is the magnificent Gothic cathedral Notre-Dame de Rouen which I already mentioned in my post on the tallest church buildings in the world. The cathedral is 151.0 meters (495 ft) in height, which makes it the tallest church in France today. In addition, from its completion in 1876 till 1880 the Rouen Cathedral was the tallest building in the world. Except for the cathedral, Rouen has a beautifully restored medieval quarter. This is also where Joan of Arc was brought to trial and where she died 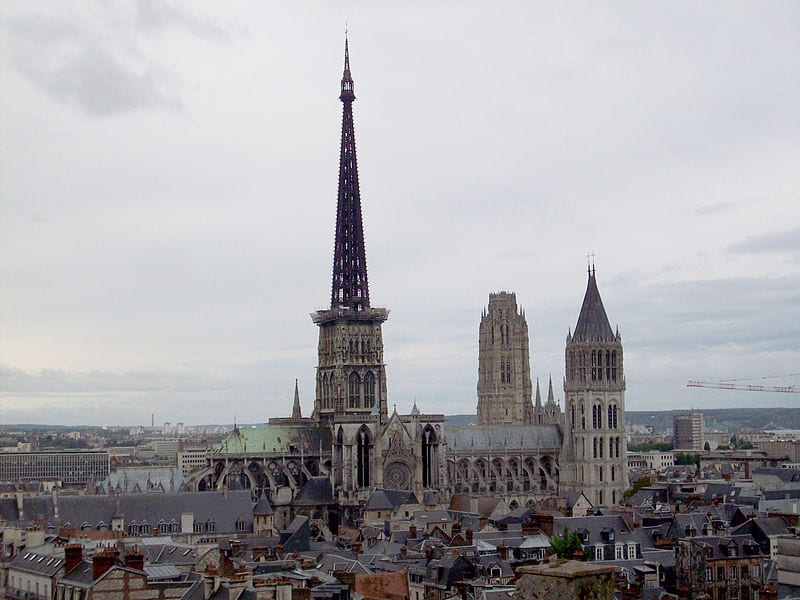 6. Saint Malo – Technically speaking, Saint Malo is in Brittany, not Normandy. But being less than an hour drive away from Mont Saint Michel, you shouldn’t let this prevent you from visiting the beautiful town. I mentioned Saint Malo in my list of most beautiful walled cities, and I’m glad I have a chance to mention it again. Like other places along this coast, the city exhibits an impressive tide, as well as a beautiful Chateau. You can easily walk on the walls of the city and enjoy the view both inside and outside the walls. Then, enjoy a meal in one of the town’s fine restaurants 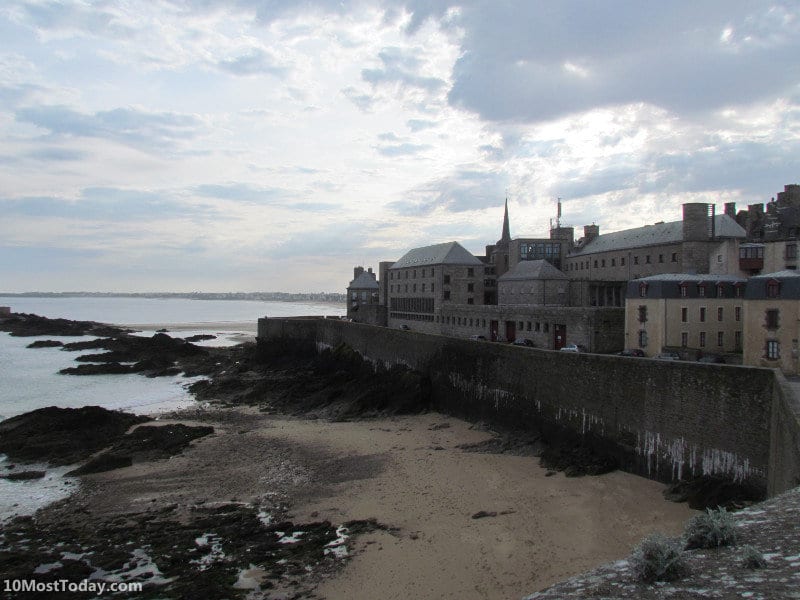 The city walls of the beautiful town of Saint Malo, Brittany 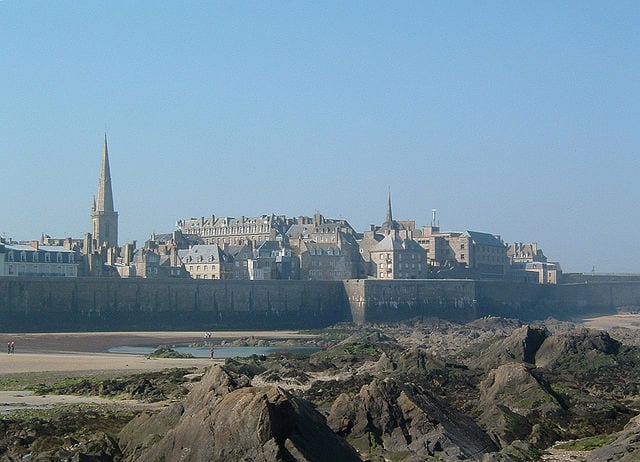 Saint Malo seen from outside the town walls

The following sections are monuments and point of interests regarding the Allied invasion to the German-occupied northwestern Europe. This invasion began here, in Normandy, on June 6, 1944, better known as D-day. There are many remains from the battles, lots of memorials, cemeteries and museums spread all over the region. I mention here the most important and recommended of these sites, each of which will reveal another piece of the remarkable story

7. Omaha Beach and the American Cemetery – Omaha Beach was one of five landing points of the Allied invasion, in June 6, 1944, also known as D-Day. On the beach itself you’ll find memorials that commemorate the event and location, and honor the memory of the fallen. The memorials are near the village of Saint-Laurent-sur-Mer. A short walk from the beach is the American Cemetery. 9,387 soldiers that died in Normandy were buried close to where they have fallen. This huge cemetery will leave you heartbroken and speechless 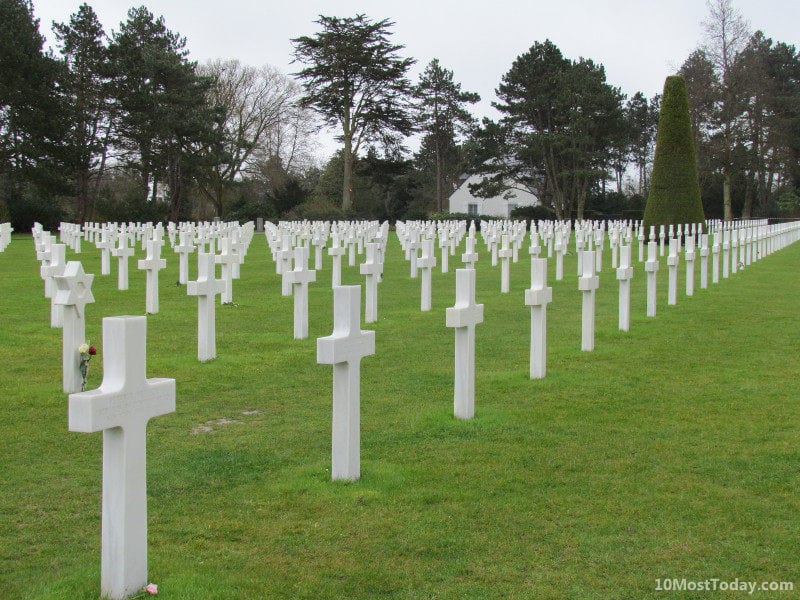 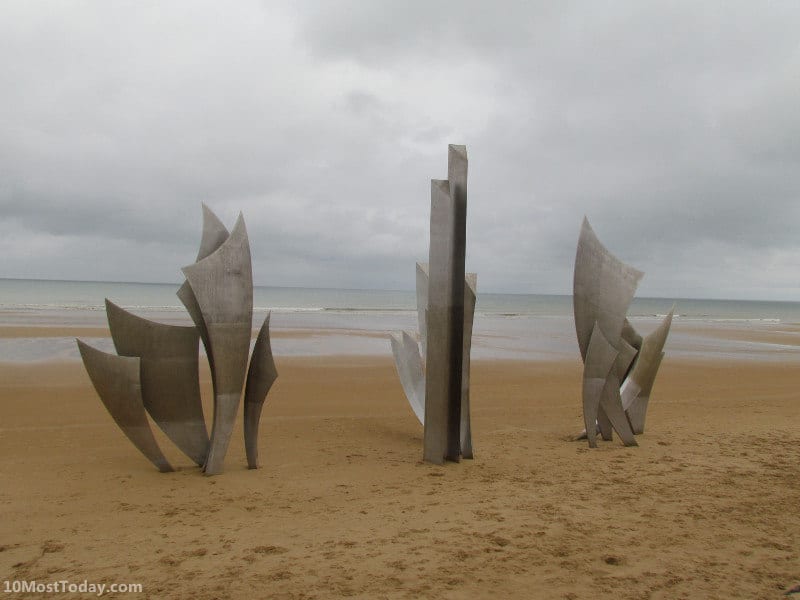 8. Arromanches and the D-day Museum – Arromanches-les-Bains is located on the coast, not far from Omaha Beach. Arromanches had a major significant during the Allied invasion, as it was here that the artificial port Mulberry harbor was installed. The artificial port was installed quickly off the shore itself where the water is still deep, to allow big vessels to disembark vehicles and equipment – without waiting for the existing deep water ports in Le Havre or Cherbourg to be conquered. The artificial port allowed the disembarkation of 9,000 tons of material per day, and by June 12, just 6 days after the invasion began, more than 300,000 men, 54,000 vehicles, 104,000 tons of supplies had been landed through the port. During the entire 100 days of operation of the port, 2.5 million men, 500,000 vehicles, and 4 million tons of material were landed. Today you can still see parts of Mulberry harbor peeking out of the water in front of Arromanches.

The town of Arromanches is also home to the recommended D-day Museum that is devoted to the story of Mulberry Harbor as well as D-day in general. Click here for the official site 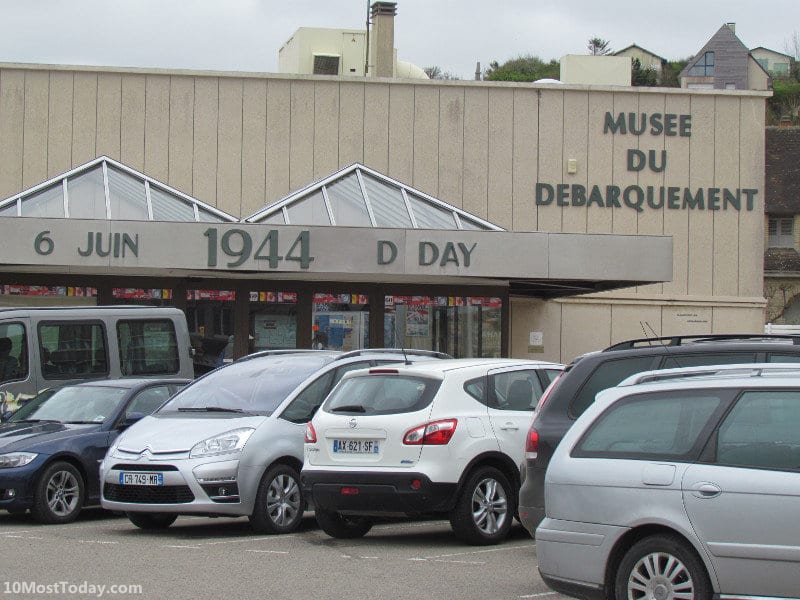 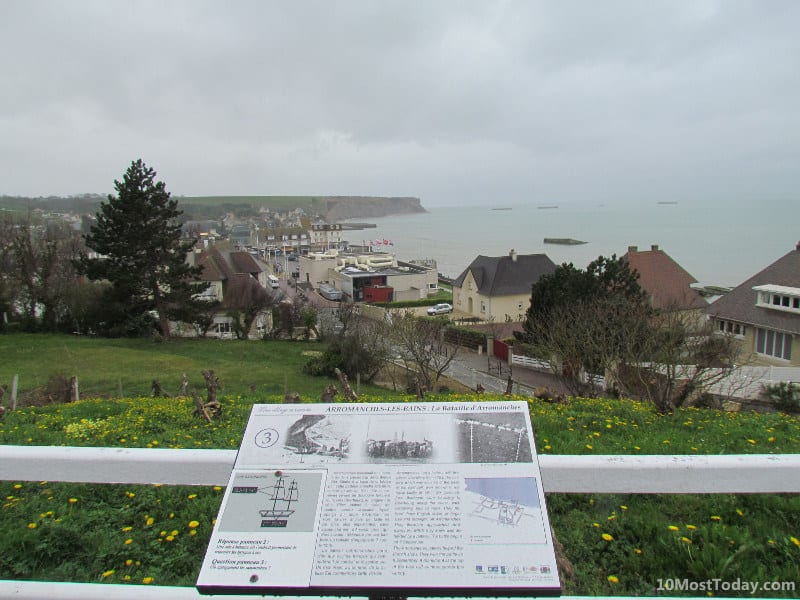 View of Arromanches-les-Bains. In the ocean in front you can see parts of the historic Mulberry harbor

9. German Longues-sur-Mer Battery – Longues-sur-Mer is a small village on the coast. The German army built an artillery battery here as part of the Germany’s Atlantic Wall coastal fortifications. The night before D-day, this battery was targeted by aerial strikes of around 1,500 tons of bombs, but most of them missed. The next day the battery exchanged fire with US and British battleships, which succeeded to disable most of the German artillery. And the following day 184 German soldiers surrendered to the British 231st Brigade. The battery still stands today near Longues-sur-Mer, and visitors can visit inside the bunkers, walking down the concrete stairs to small rooms where German soldiers once stood, seeing the beaches in front of them through small narrow openings and behind big artillery guns 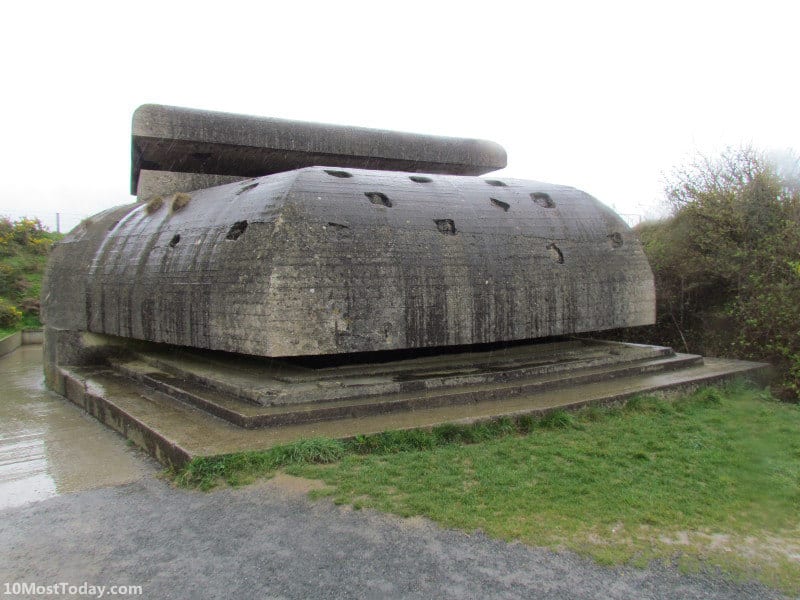 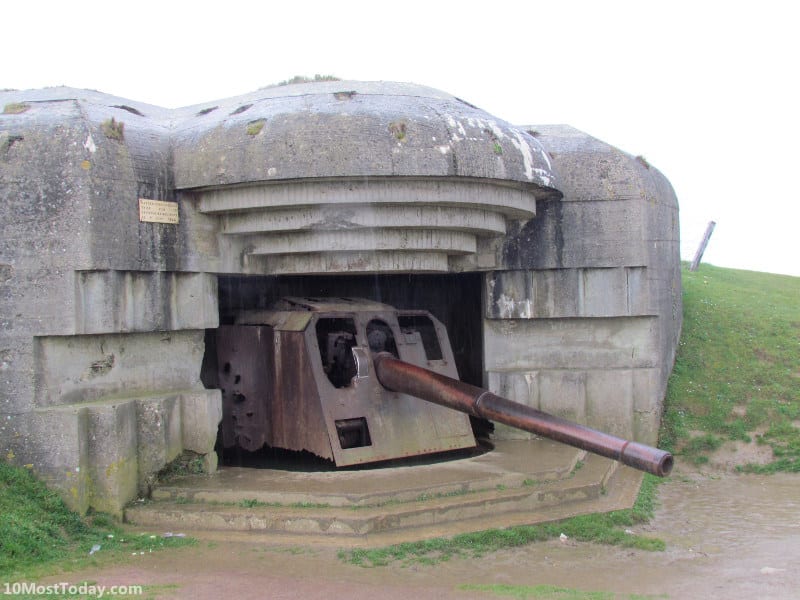 10. Pegasus Bridge and Memorial – The Pegasus Bridge is a movable bridge built over the Caen Canal in 1934, under the name Bénouville Bridge. Taking over this bridge was an objective of the British 6th Airborne Division during D-Day. A unit of Glider infantry successfully carried-out this mission, which helped limiting the German counter-attack effectiveness in the following days and weeks. The bridge was renamed Pegasus Bridge in honor of the British airborne forces, which a flying Pegasus was their unit symbol. A small memorial stands next to the bridge, commemorate these events and the soldiers 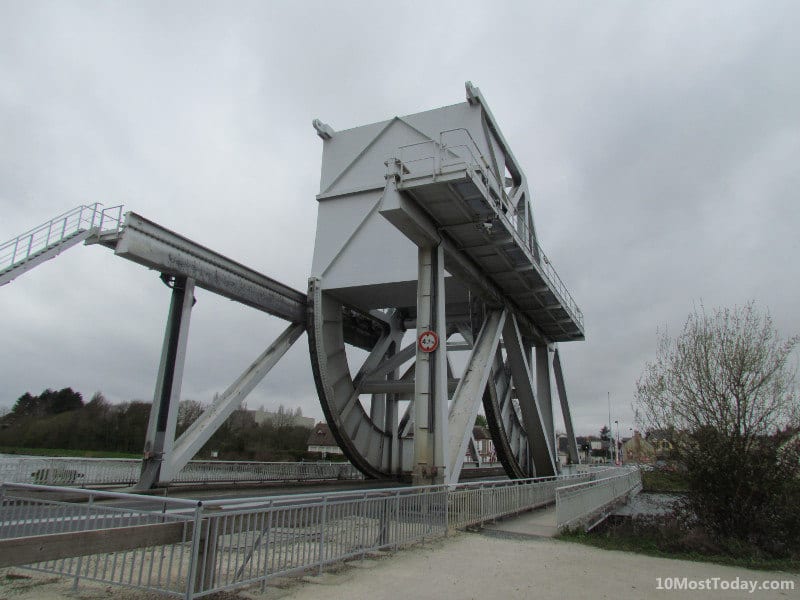 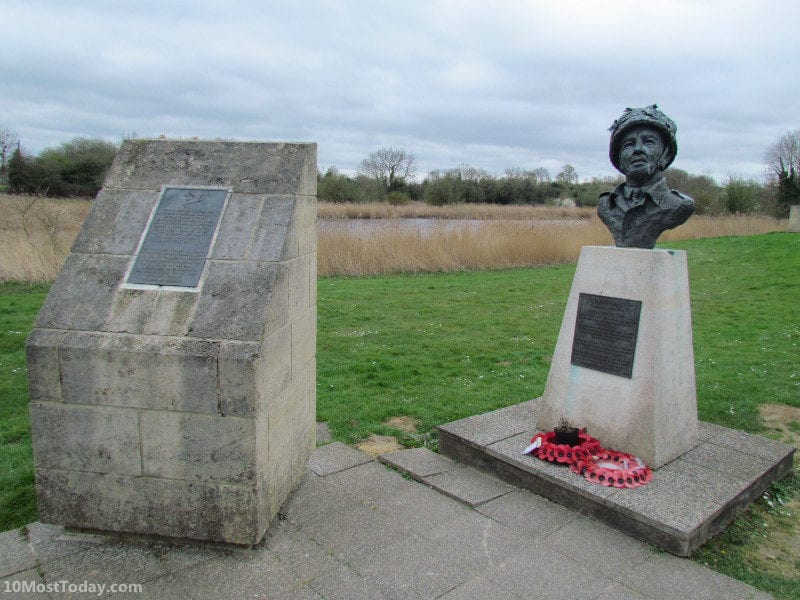 Recommended Landmarks in Normandy: The memorial next to the Pegasus Bridge

10 Most Magnificent Pyramids In The...