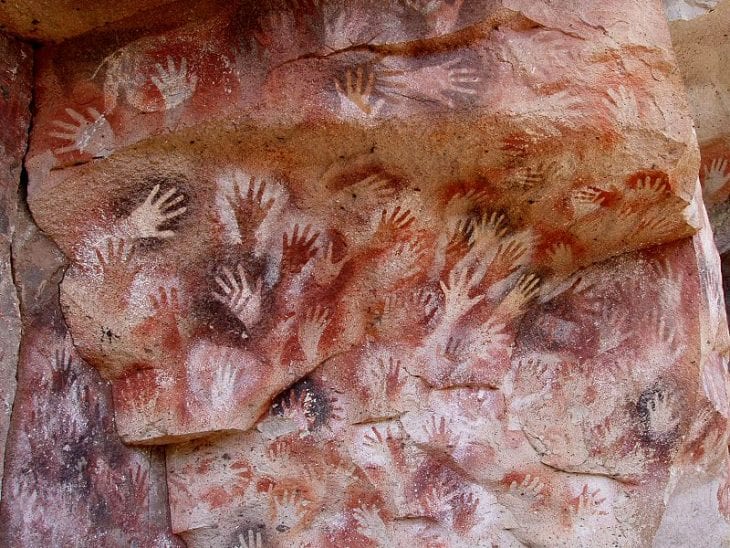 Ancient cave paintings tell us some of what it was like for the people that thousands and thousands of years ago. These paintings can be found in countries all around the world, and the one thing they all have in common is their depictions of the animal life that existed during the time. Many of the cave paintings are so detailed and well preserved that art experts actually thought them to be forgeries. After careful studying of the mediums used to create the images, and the rudimentary tools depicted in the hunting scenes, the experts have decided the paintings range in age from 1500 years ago yp to incredible 32,000 years ago!

These incredible and unique cave paintings are found in Santa Cruz province, Argentina. The paintings in Cueva de las Manos depict animals and hunting parties, but the most notable drawings without a doubt are of human hands. Most of these hands are left hands, and it is believed that the painters painted using a spraying pipe in their right hand over the left hand that was on the cave walls. These cave paintings are 3,000 to 9,000 years ago 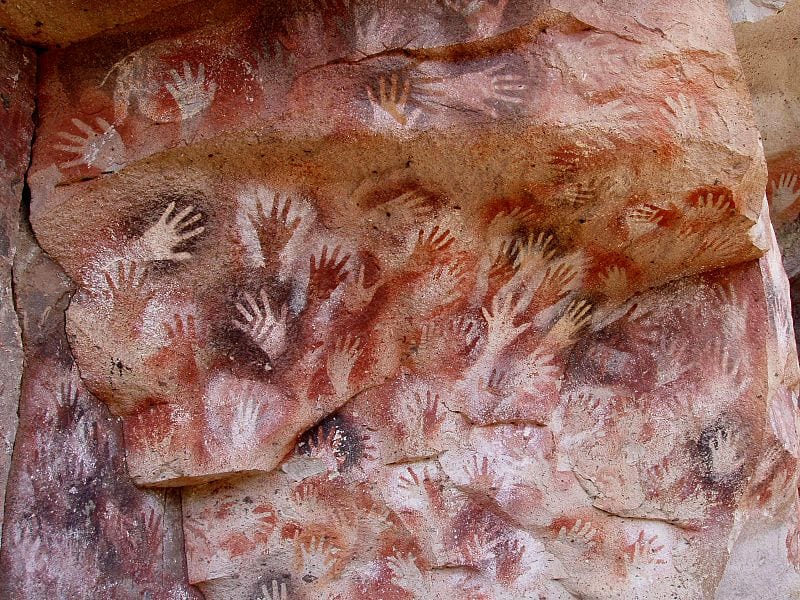 The paintings in Altamira cave are some of the best preserved ancient cave paintings in the world. This artwork was discovered in the late 19th century by Marcelino Sanz de Sautuola, and it is said to be between 14,000 and 18,500 years old. The art society was so amazed by the intricate detail and the vivid colors of the paintings that they actually accused them of being modern day forgeries. In 1902 the art was finally declared to be authentic 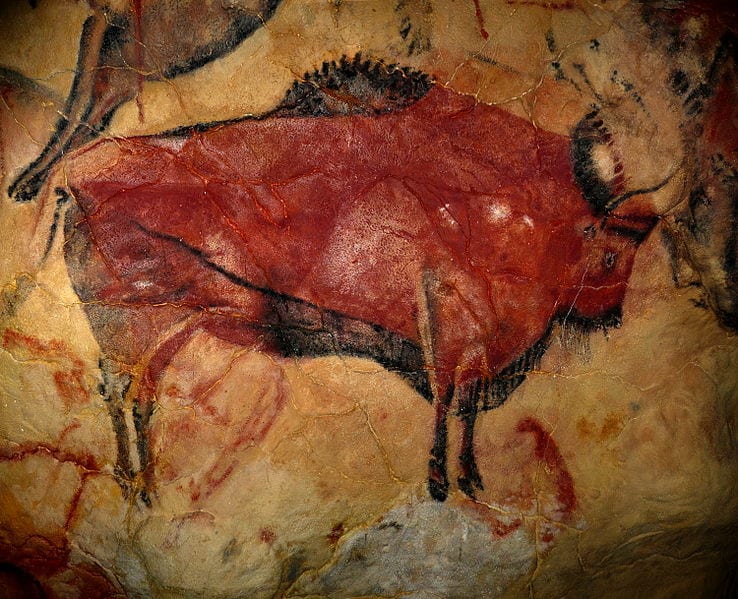 A reproduction of a bison drawing in the Altamira Cave

The clear outlines and distinctive colors used in these paintings have remained exceptional although the paintings are said to be between 5,000 and 11,000 years old. The paintings which are some of the best preserved cave paintings in all of the African continent are located on rocky outcroppings and throughout a complex series of caves 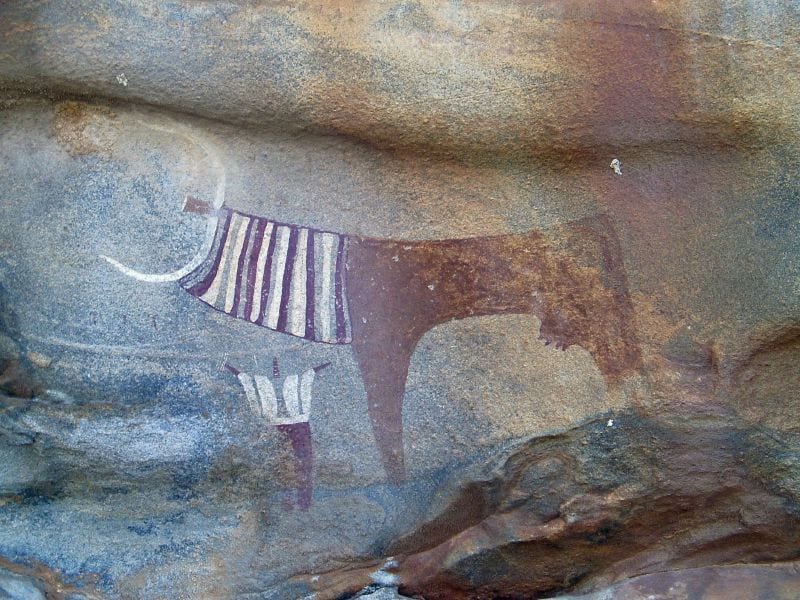 Bhimbetka consists of more than 600 rock shelters in Central India. The majority of the paintings are done in red and white colors. According to experts, these drawings are approximately 12,000 years old. These are some of the few ancient paintings that include depictions of animals such as crocodiles among the lions and tigers 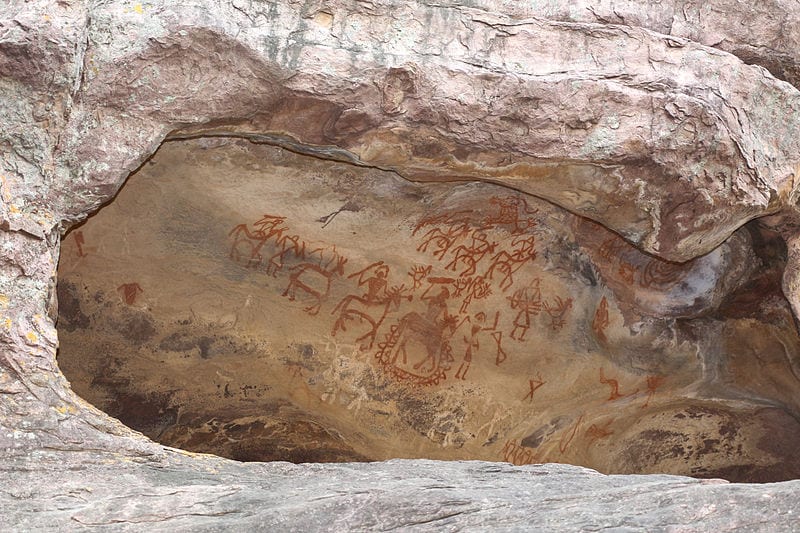 It is estimated that the paintings on the walls of this cave are more than 17,000 years old. The magnificent art work is situated so deeply inside the cave that the only way the artists could have drawn it was by candlelight, because natural light does not penetrate that deeply into the cavern. This cave is no longer accessible to the public due to concerns of too many visitors causing damage to the art work. The French government have made replicas of the art work so visitors can see it without causing damage to the original 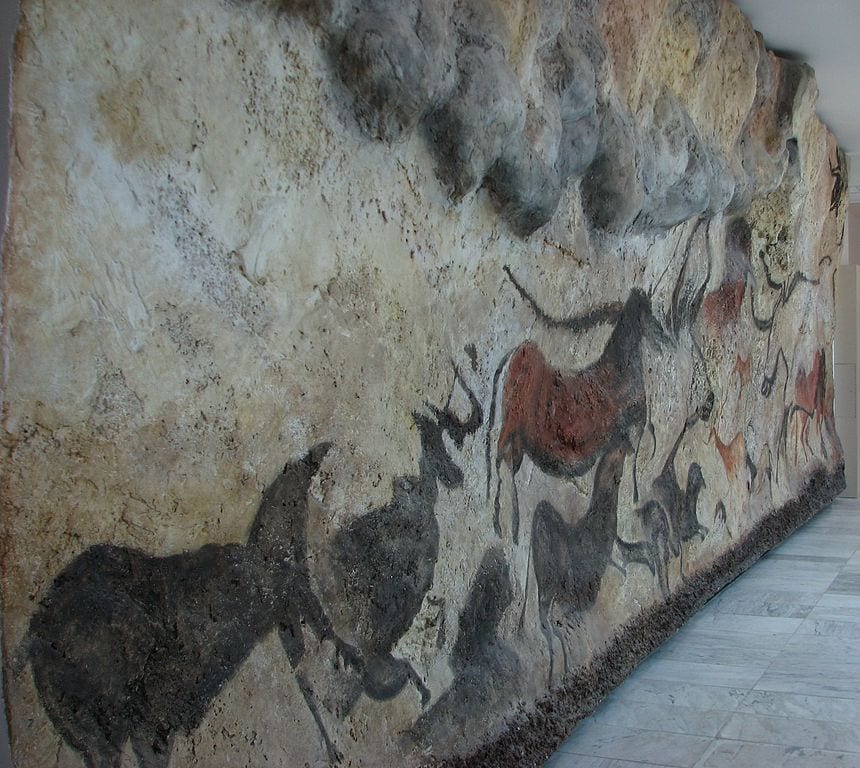 A replica of the Lascaux Cave drawings in the Anthropos museum, Czech Republic

The oldest of the cave paintings located in the Serra da Capivara National Park are said to be around 25,000 years old. The paintings are highly detailed depictions so hunting parties, and rituals that were celebrated at the time. They include images of animals and trees throughout the cave 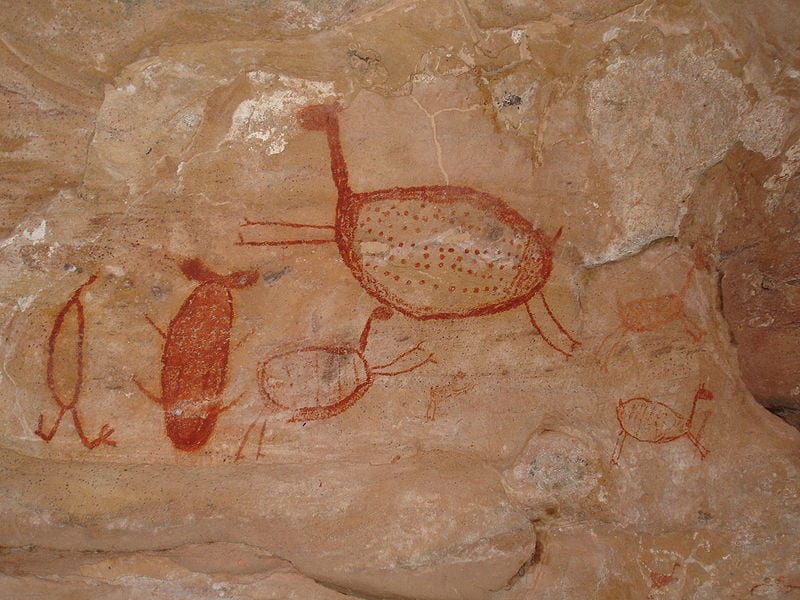 The unique paintings in this collection date from 12,000 BC until 100 AD. The paintings show what the Sahara desert was once like with lush green areas and lakes of water. Many different species of animals are depicted on these cave walls 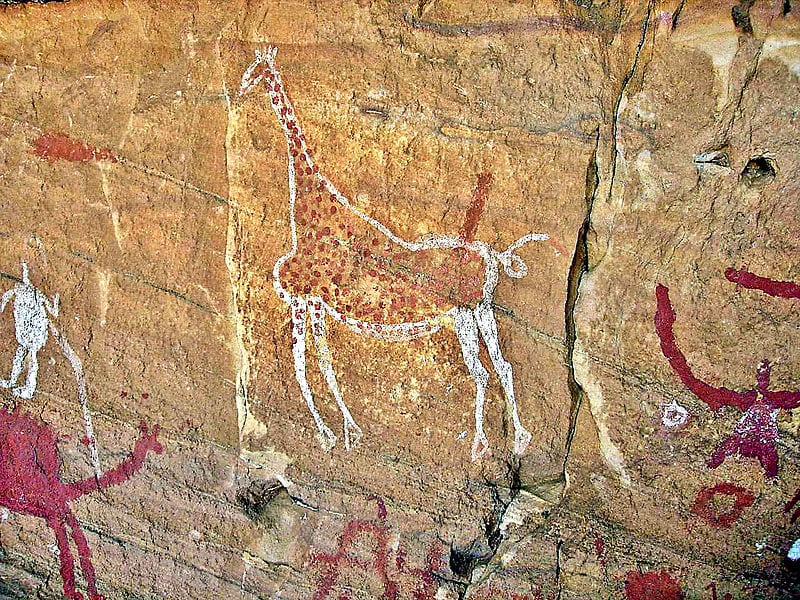 This collection includes about 5,000 Aboriginal art sites on the rocks of the National Park. The oldest of these paintings is said to be as old as 20,000 years. This unique artwork of the Aboriginals includes some drawings of not just animals, but also the animal skeletal bones 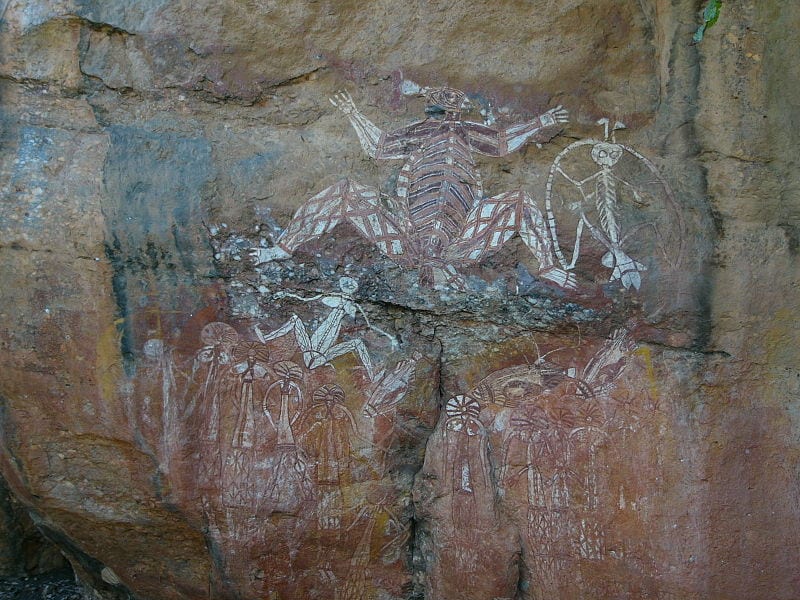 The paintings in the Magura Cave are done using bat excrement as a medium. The paintings are said to have been finished between 4,000 and 8,000 years ago, and they depict a wide range of animals from the area. The artwork also shows hunting parties and celebrations 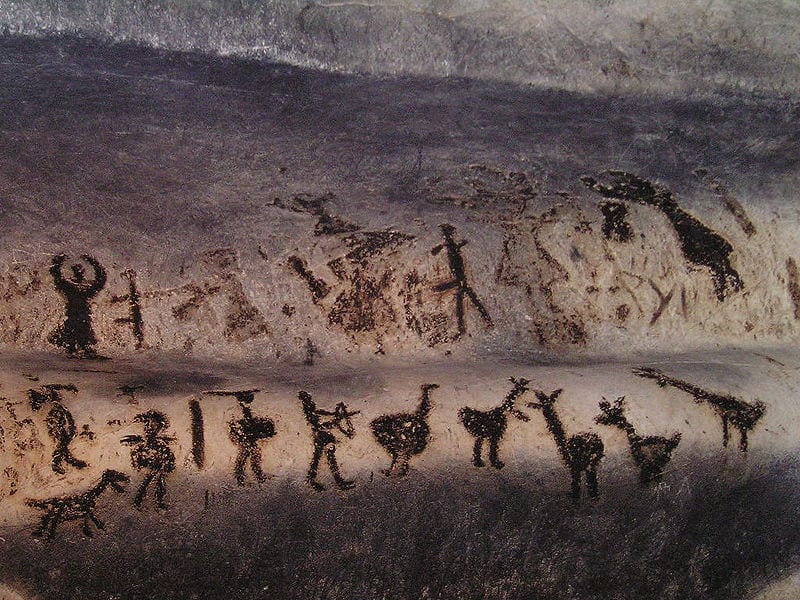 This beautiful artwork was discovered only around 1994. The images consist of mammoths, lions, bears, and even rhinos. The art work is said to be around 32,000 years old, making it the earliest in this list 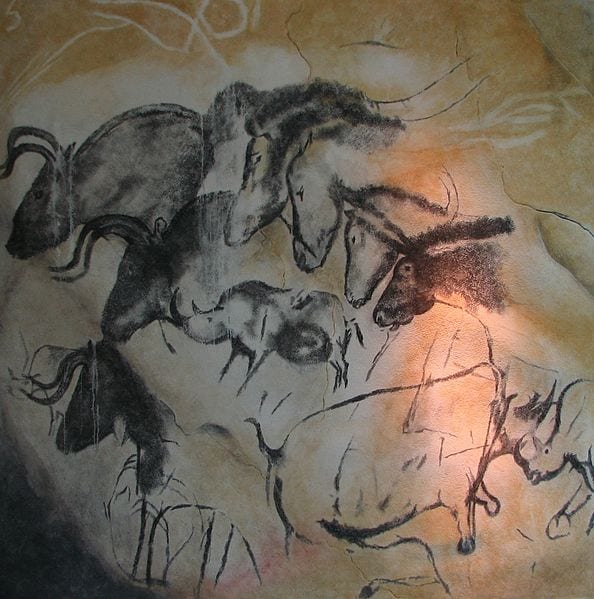 A replica of the Chauvet Cave drawings in the Anthropos museum, Czech Republic