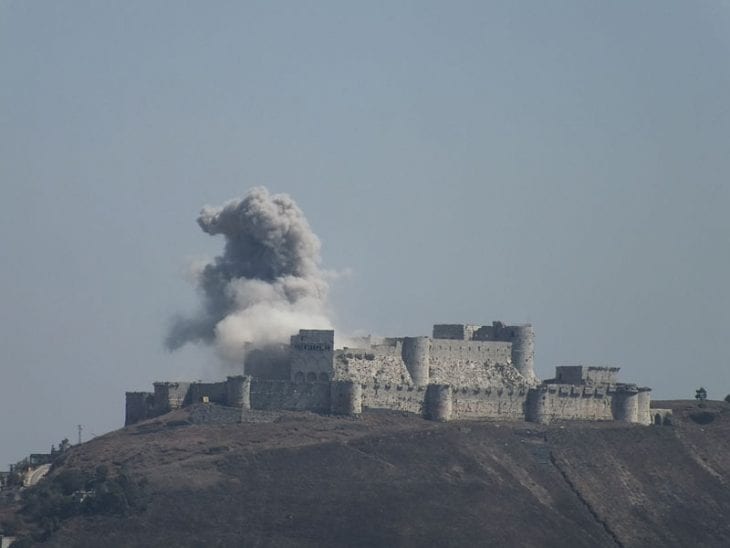 Following is a list of ten sites and landmarks with historical, archaeological or religious significant that were destroyed by war in recent history. Some of these sites were damaged during nearby fighting, while others were demolished on purpose by radical extremists

1. The Ancient City of Bosra, Syria – Bosra was the captial of the Arabian part of the Roman Empire. Evidences for the city’s glory days can be seen everywhere around the ancient city which is a UNESCO World Heritage Site. The best preserved structure is the beautiful Roman Theater. Built during the 2nd century AD, the Roman theater at Bosra is one of the best preserved in the entire Middle East and one of the largest theaters built by the Romans, capable of holding at much as 15,000 spectators. According to archaeologists, the ancient city of Bosra and specifically the theater were severally damaged by mortar shelling and gunfire during the recent war in Syria 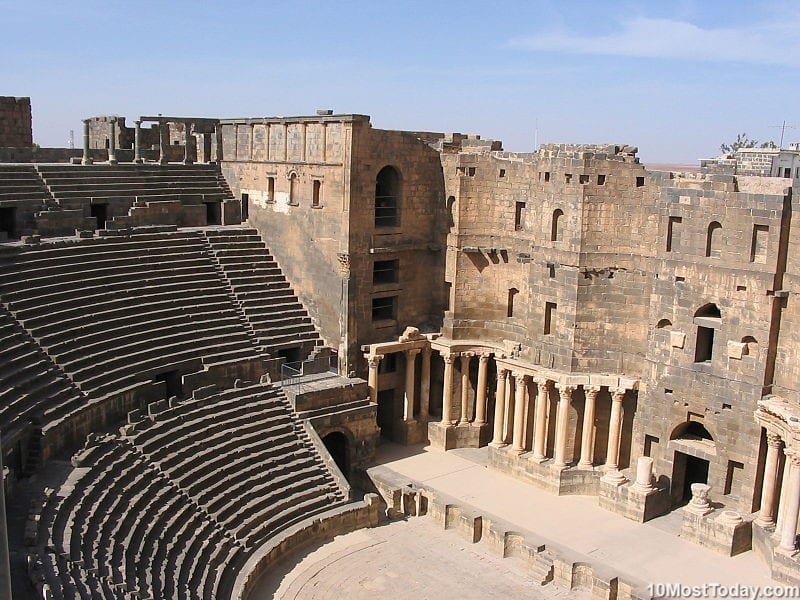 10 Monuments Destroyed By War: The Ancient City of Bosra

2. Buddhas of Bamiyan, Afghanistan – The Buddhas of Bamiyan were two huge statues of Buddha carved into the side of a cliff in the Bamyan valley, 230 km (140 mi) from Kabul. Located on the Silk Road, the two famous statues measured 53 meters tall (173 ft) and 35 meters tall (114 ft). The statues were blown using dynamite in March 2001 by the Taliban 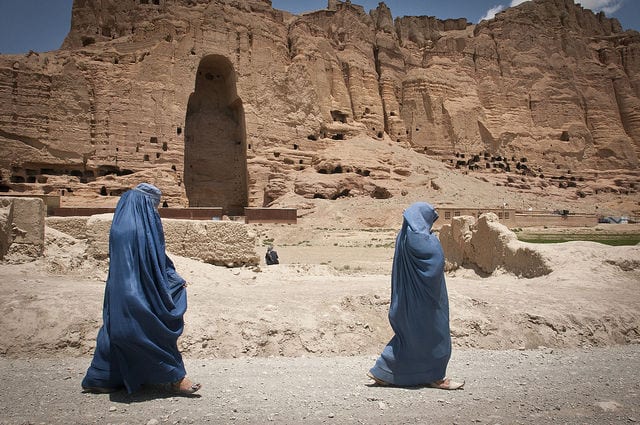 3. Palmyra (Tadmor), Syria – The first signs of settlement in the area are stone tools dated to 7500 BC, and the first documentation of the city was during the Bronze Age around 2000 BC. The city is even mentioned in the Hebrew Bible under the name Tadmor as a desert city built by King Solomon. The large archaeological site seen in modern days dates back to the Roman Empire, with amazing structures like the Temple of Bel, a wonderful Roman Theater (which I previously mentioned in my list of Roman Theaters), the Temple of Baalshamin, Monumental arch, Tower of Elahbel and more. In 2015, during the Syrian Civil War, ISIS destroyed large parts of Palmyra, including the Temple of Bel, the Temple of Baalshamin, the Tower of Elahbel, the Monumental Arch, many large statues, and more 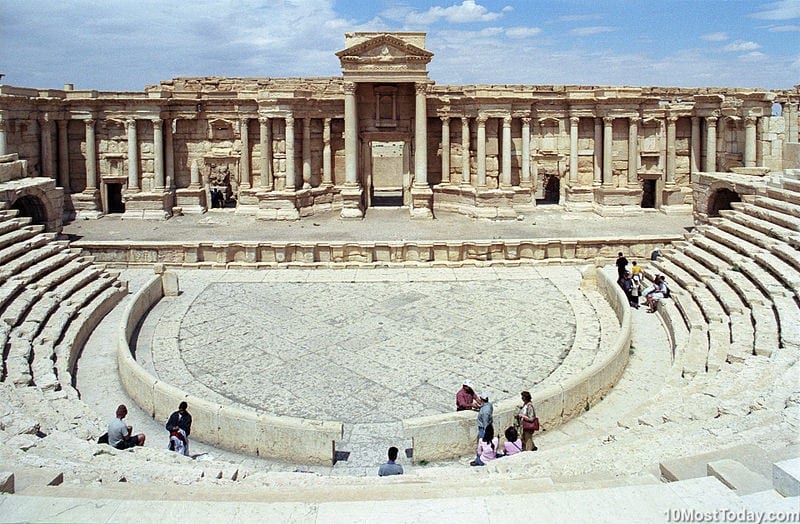 4. Krak des Chevaliers, Syria – I already mentioned Krak des Chevaliers in my post on the most impressive crusader castles. It is the largest crusader castle in the world, and one of the most important and best preserved medieval castles in the world. The castle sits on top of a 650 meter high (2,130 ft) hill east of Tartus, and was first inhabited in the 11th century by a settlement of Kurd. In 1142 it was given by Raymond II, Count of Tripoli, to the Knights Hospitaller. It remained in their possession until it fell in 1271.The crusader chapel and the castle walls, as well as other parts of the castle were damaged during the Syrian Civil War, as the castle’s strategic location as well as its actual structure were used in the fighting by both the rebel forces and later by the Syrian army. The castle was hit on several different occasions by both mortar shells and airstrikes. The extent of the damage is still unknown 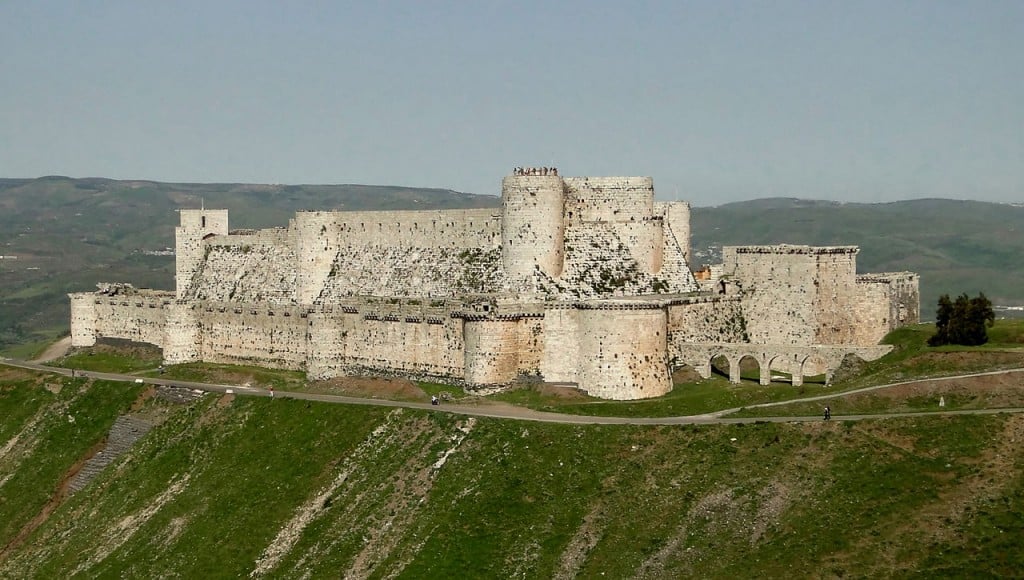 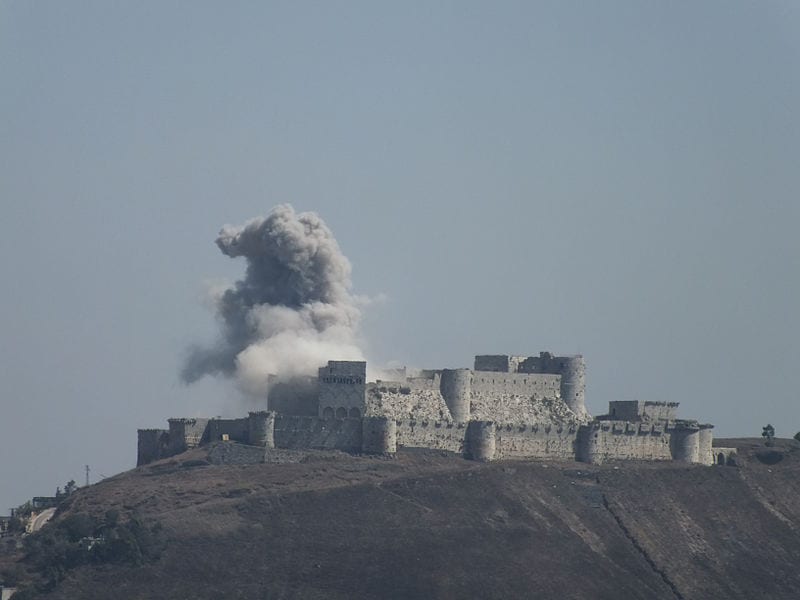 Smoke coming out from the Krak des Chevaliers castle during the war in Syria, 18 August 2013 (source: Syria963)

5. Cyrene, Libya – An ancient Greek and Roman city near present-day Shahhat. Established in 630 BC, the city was the oldest and most important Greek city in the area and was nicknamed “Athens of Africa”. The ruins of Cyrene are an UNESCO World Heritage Site and known to be some of the best preserved from that period, including the city’s unique necropolis complex. During the Libyan civil war, parts of the UNESCO Heritage Site were destroyed, including a 3rd century viaduct, the necropolis complex and around 200 tombs 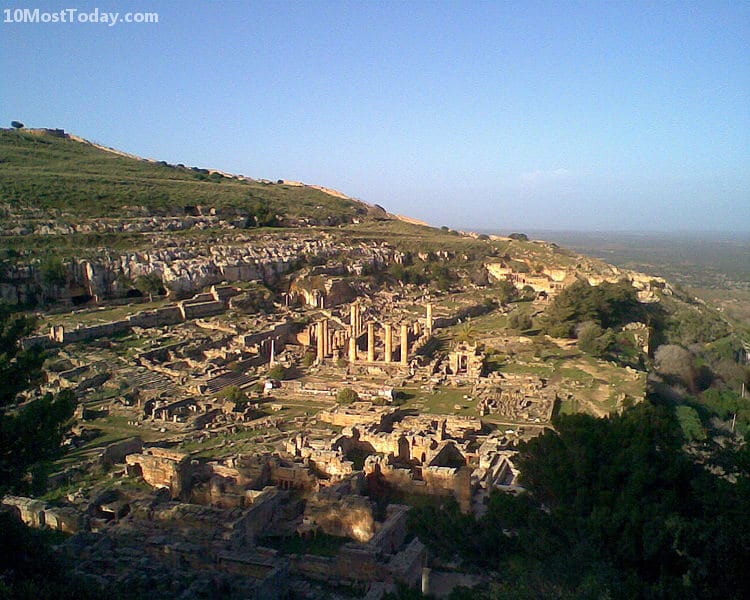 6. The Malwiya Tower, Great Mosque of Samarra,  Samarra, Iraq – The Great Mosque of Samarra was built in the 9th century and was for a while, the world’s largest mosque. The Malwiya Tower, part of the mosque (its minaret), was a 52 meters (170 ft) tall spiraling cone. In 2005 the top of the beautiful spiral tower was damaged by a bomb set by insurgents 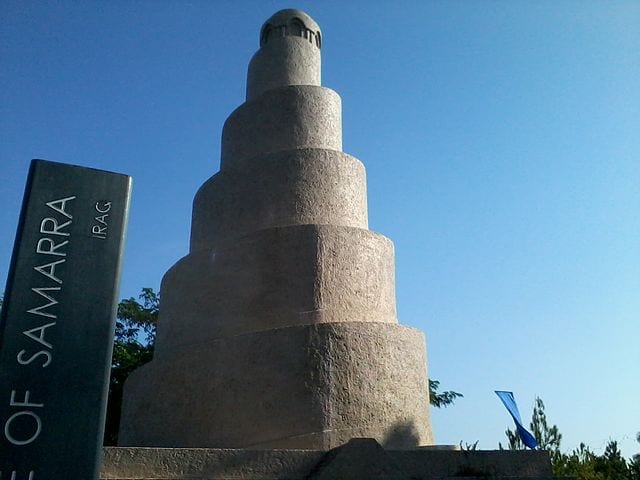 7. Nimrud, Iraq – Nimrud is located 30 km (20 mi) south of Mosul. It was a major Assyrian city for centuries between the 13th century BC to the 7th century BC. The archaeological excavations began in the mid 19th century, and revealed an enormous number of artifacts (including a collection of 613 pieces of gold jewelry and precious stone) and structures. Following the 2003 invasion to Iraq, the city was looted. Furthermore, in 2015 ISIS (also known as ISIL – Islamic State of Iraq and the Levant) destroyed excavated remains in the city using bulldozers, sledgehammers and explosives, and posted videos of these actions online 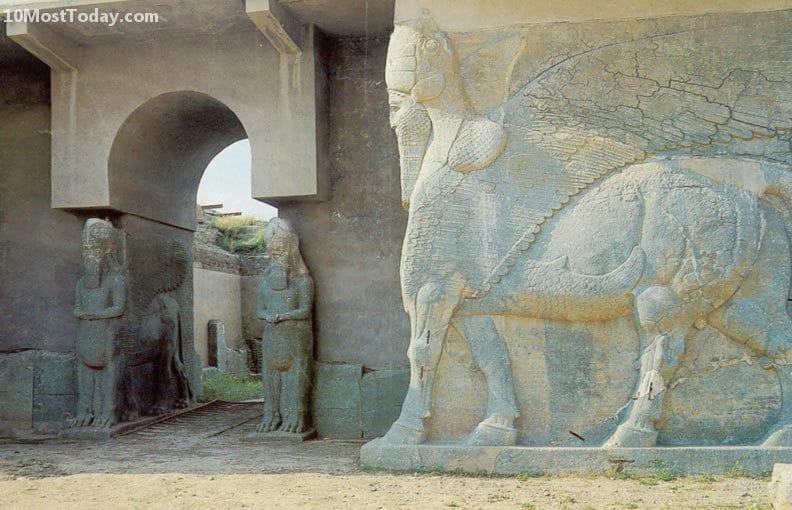 8. Jonah’s Tomb, Mosul, Iraq – Located just outside the walls of ancient Nineveh, Jonah’s Tomb was believed to be the burial place of the biblical Jonah. Once a christian church and later a mosque, the site had importance to both Christians and Muslims. In 2014, ISIS completely blow up the site, claiming it became a place for apostasy and not prayer 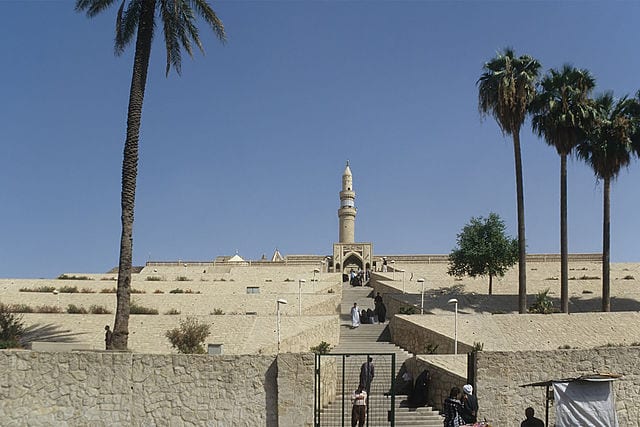 9. Citadel of Aleppo, Syria – The large castle is located in the center of the old city of Aleppo, northern Syria, and is considered to be one of the world’s largest and oldest castles. The castle was built originally more than 4,000 years ago, and the castle seen today dates back to the 16th century and hardly changed since then. The citadel is also an UNESCO World Heritage Site. During the recent war in Syria, the citadel was used by the fighting sides and as a result it sustained significant damage 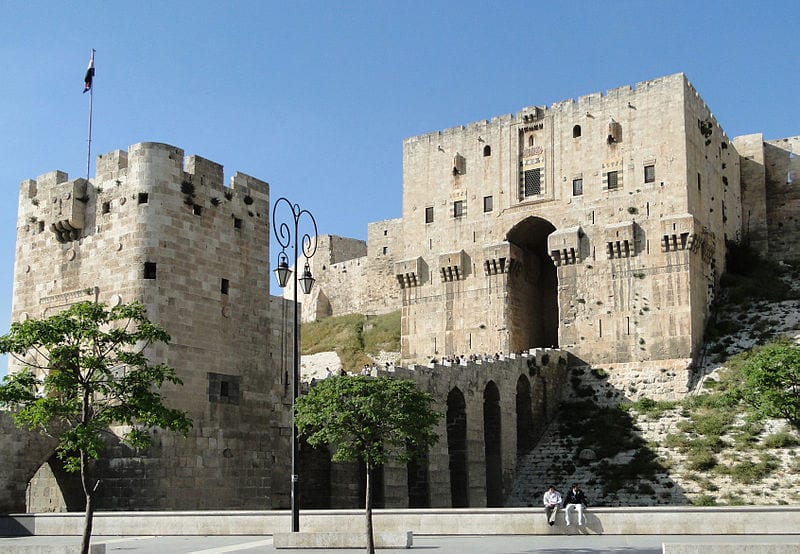 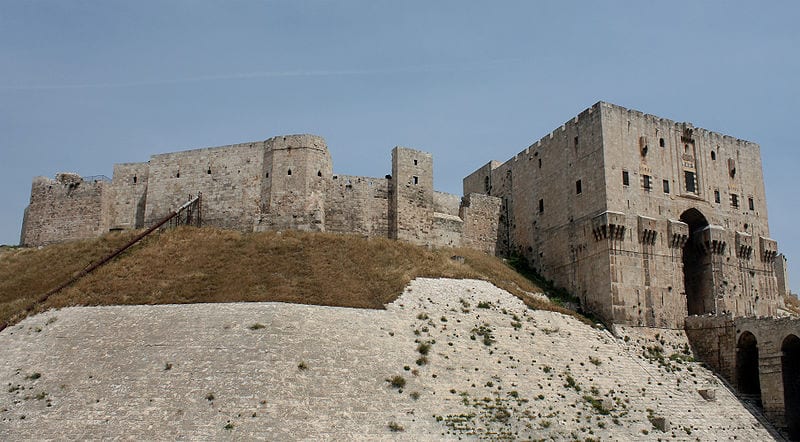 10. Khalid ibn al-Walid Mosque, Syria – Located in Homs, this mosque is between the most famous Ottman style mosques in Syria. During the ongoing war in Syria, the mosque was at the front-line of the fighting and used by the rebel forces. As a result, the Syrian army shelled the building and recaptured it, causing fire, massive damage to the mosque, and completely destroyed the sacred mausoleum 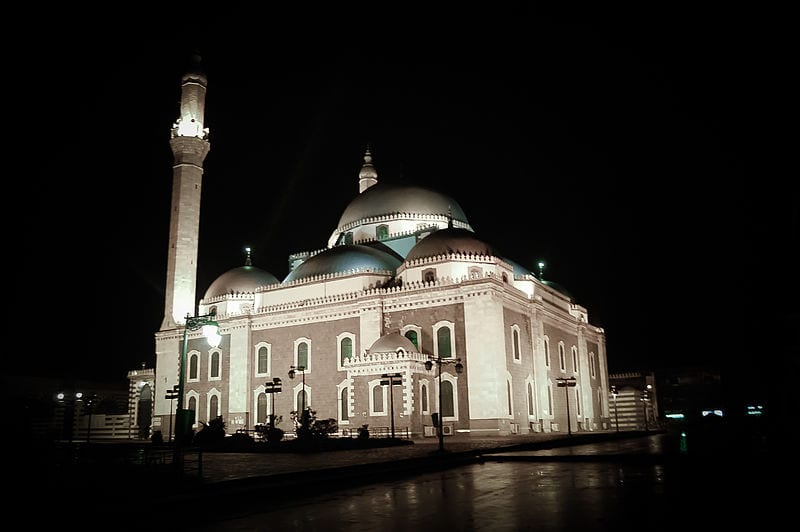