10 Most Common Reasons Why a Person Abuses Drugs 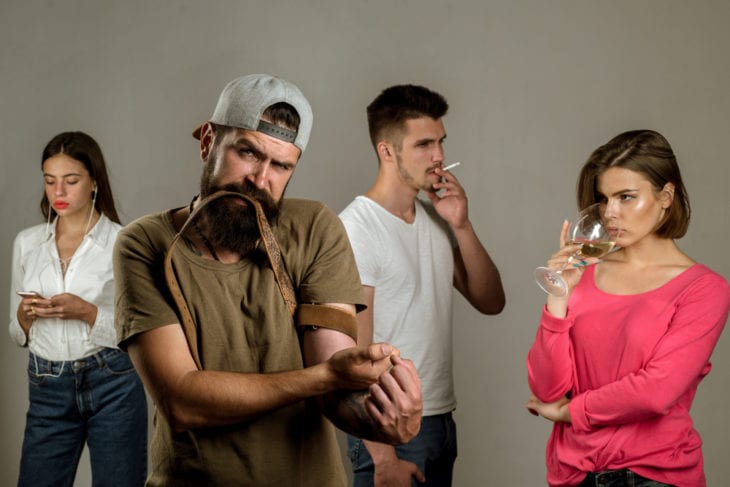 If a person feels troubled, he cannot normally think. If a person attempts to fix his problem in life and finds no other way to solve it, there’s a chance that he will seek drug as his last option. This is the main reason why some people choose to use drugs.

As we can see nowadays, some young individuals are indulging themselves in alcohol and drugs and making it as part of their lives. Young people are fond of making parties with their friends. On the other hand, lots of individuals are using drugs as their way to self- medicate. From a long-term pain going to mental health diseases, lots of people are using drugs to reduce the pain or relieve the symptoms. But too much of this is considered as an addiction which is not a good thing.

Now, we will give you the list of most common reasons why a person abuses drugs.

Nowadays, people are using alcohol or drugs with their friends or to “unwind” themselves from a tiring long day. It is mostly seen that drugs can be a way to chill and unblock their minds. Recreational drugs consumers can be at risk to get addicted if they use it frequently or in high dosage.

We all know that “curiosity” motivates the person to experiment something like marijuana and alcohol. According to NIDA or National Institute on Drug Abuse, they will likely to have the substance use disorder.

People who are struggling with several illnesses might have an idea to use drugs or alcohol to ease the pain they have been experiencing. Mental health diseases and long-term pain can lead them to look for a solution without a doctor’s prescription. Drugs, alcohol and other substances can reduce symptoms and can also be a quick-term answer. Nevertheless, people must seek long-term ideas with proper medical supervision to fight these problems.

We all believe that any medication given to us by the doctor is always safe. But sadly, it is not all true. Doctors prescribe the drugs to relieve the symptoms of the illness or prevent it from getting worst. Proper dosage, amount and timing should be observed. However, lots of individuals are not aware or have not fully understood the risks of taking it in a wrong way. Long-term pain is mostly controlled by an opioid treatment, and this is extremely addictive. If a certain person is dependent on the volume being used and with other factors, he may seek a medical detox in order to prevent using opioids. Also, for those who undergo from depression and anxiety, might be prescribed of addictive drugs to reduce their symptoms. Pain management services or non- addictive treatment might be a good option.

Family history might be a predisposing factor for a person to be addicted to drugs. It can develop in genetic predisposition. Estimated to be 30%- 70% in the person’s risk factor to obtain drug dependence is associated with the genes and other social circumstances.

Addiction to drugs or alcohol might begin when a certain individual feels alone or lonely. They tend to use drugs in order for them to feel happy and release the feeling of loneliness they keep. People using drugs are the people who lack positive interaction every day with no social support and turn to drugs to make them happy.

7. To make you feel better

We found a quote in a famous book of Alcoholic Big Book Anonymous stating that women & men drink every day because they want or like the impact of alcohol. Obviously right, lots of people like it so much and cannot stop taking it. It is difficult to think or see the harmful results in something that gives you a feeling of happiness.

Peer pressure commonly happens to young adults or adolescents. The influence from the members of the group and the need to fit themselves in the group, even requiring them to do or participate in some harmful activities – one of these is using drugs. Being with the group who are using drugs can push an individual to join the tribe and do the unacceptable acts just to show loyalty.

Anxiety, post-traumatic stress disorder and depression are the common mental health disorders that have a higher chance of acquiring an addiction. Using drugs to deal that hard feelings might help to make it easy for them even though this may result to some negative effects to their body. Non- narcotic treatment are regularly available for some mental health diseases. It is better to request from a doctor for some alternative treatments than indulging yourself to these addicting medications.

10. Alcohol is not enough

To some people, alcohol has no more effect. Drinking with friends in a bar or having a small beer after a tiring day seems to be the usual case and lose its impact on the body in the long run. Other people end up “chasing the excitement” that they felt before when they were drinking the alcohol for the first time. This will encourage them to drink more, having difficulty to leave their best friend-alcohol.

There are lots of reasons why a certain individual uses drugs. Knowing the danger of using alcohol and some drugs is a 50-50 fight. We need to understand these issues so that we can make better decisions for our future.

10 Most Popular Halloween Candies in...