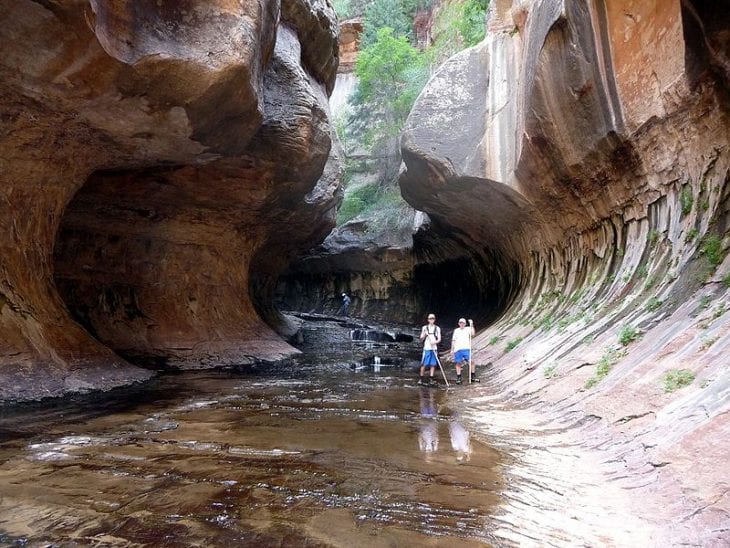 A slot canyon is a naturally formed narrow canyon, often not wider than the average arm length. The canyon walls are very high and appear to be a “slit” in the rock formation around them. These natural wonders are found all over the world, but most frequently in places that get very little rainfall.

Located near Page, Antelope Canyon is the most-visited and most-photographed slot canyon in the Southwest America, and considered as one of the world’s most beautiful canyons. It was formed by erosion of Navajo Sandstone, primarily due to flash flooding and secondarily due to other sub-aerial processes. Rainwater, especially during monsoon season, runs into the extensive basin above the slot canyon sections, picking up speed and sand as it rushes into the narrow passageways. Over time the passageways are eroded away, making the corridors deeper and smoothing hard edges in such a way as to form characteristic ‘flowing’ shapes in the rock. Flooding in the canyon still occurs 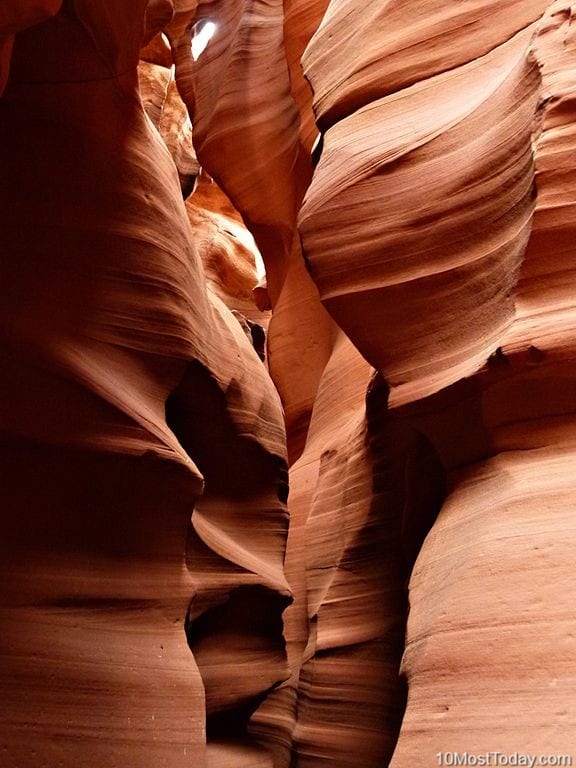 The Siq is the main entrance into the lost city of Petra. It is a slot canyon that spans 1.2 km (0.75 mi) and often not wider than 3 metres (9.8 ft)! This way the Siq was formed is unique for a slot canyon. While the majority of all slot canyons are created by water erosion, this particular gorge is the result of tectonic forces splitting a geological fault. Water later smoothed the rough area and left behind several underground chambers from the time before the split 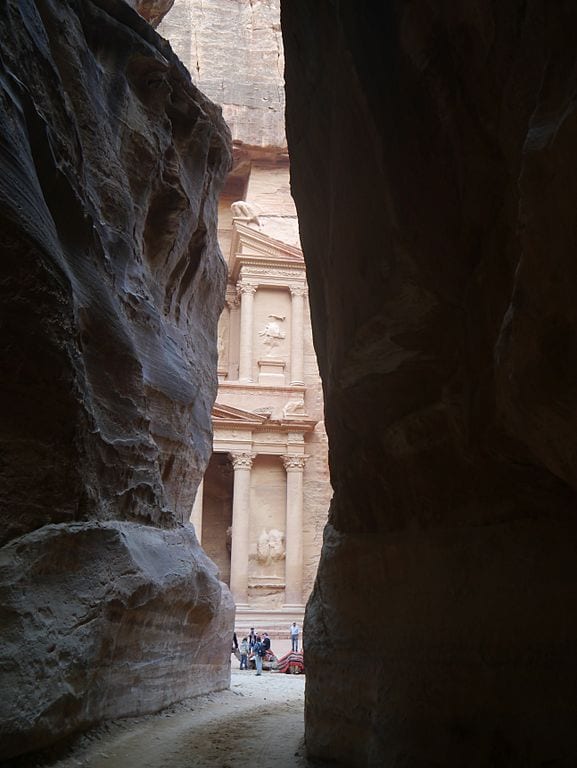 Most Beautiful Slot Canyons: The Siq (Entrance to Petra)

The Subway slot canyon is one of several slot canyons in Zion National Park, but it’s so unique it’s worthy of its own place in the list. The canyon resembles a subway tube, hence its name, and the reflection and retraction of light on the canyon walls creates a fantastic optical display. Throughout the canyon you’ll find pools of icy cold water that stands in holes that have been created during the erosion process. These pools are home to many insects and amphibians 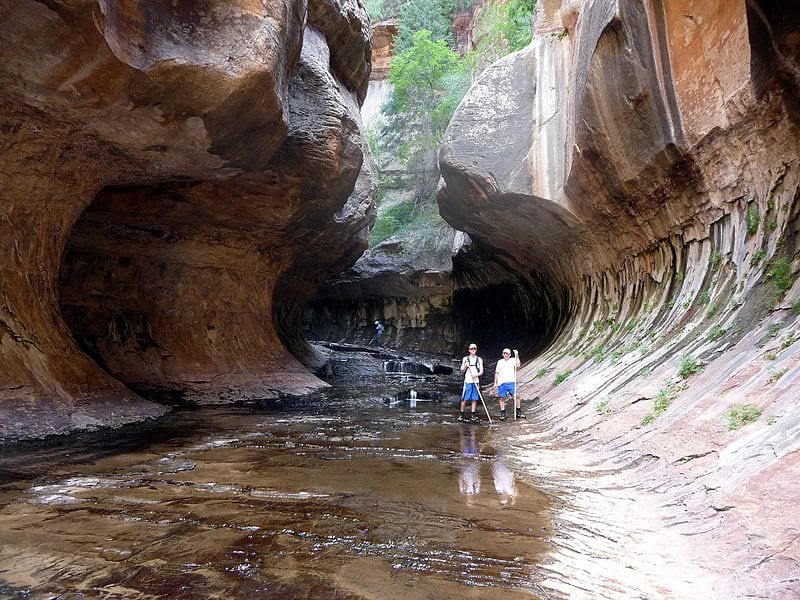 Zion Natural Park is one of the most visited national parks in the United States. It is home to several slot canyons, one of which is the location of “The Narrows” – a popular hike that was rated #5 in the National Geographic ranking of America’s Best 100 Adventures. The hike is 16 miles (26 kilometers) long, most of which is done by walking within a slot canyon that carries the Virgin River. In areas of the trail the water is waist deep and in some areas the water is only inches deep 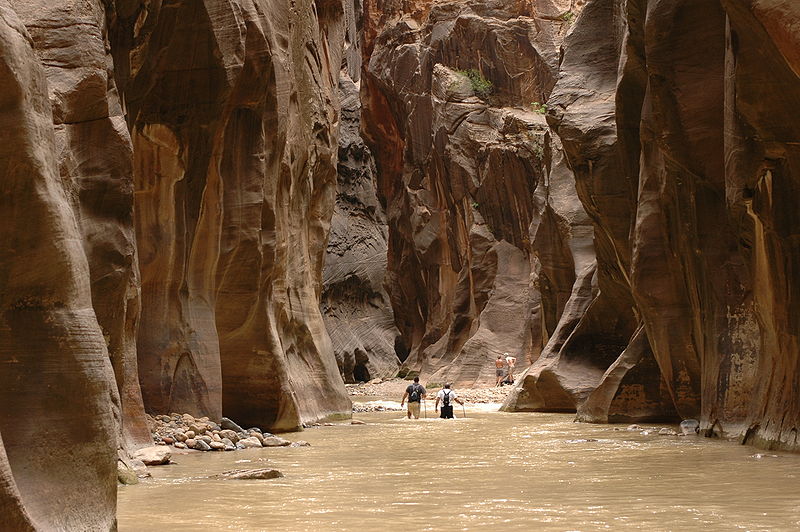 This slot canyon is probably the most photographed slot canyon in the world. This is actually not one, but two slot canyons that are very close together. The first is 62 ft (19 m) wide and 118 ft (36 m) long and the other is 7 ft (2 m) wide and 52 ft (16 m) long. The attraction is primarily caused by the unusual formation of the walls that happened as the water eroded them. This area welcomes tourists, but only twenty tourists are allowed to walk through the canyon each day. The low number is designed to keep the floor of the slot canyon from becoming damaged by the foot traffic 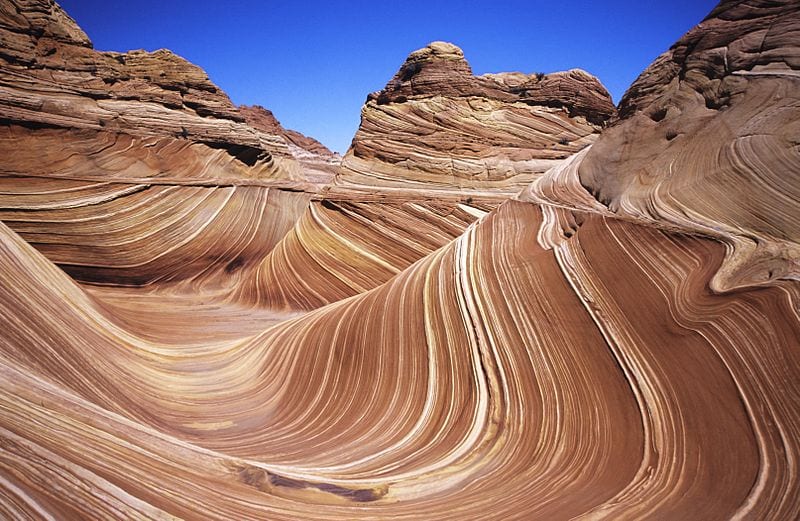 Most Beautiful Slot Canyons: The Wave

This is likely the longest slot canyon in the USA. It is also probably the deepest slot canyon with walls that reach as much as 152 meters (500 ft). This canyon is actually a tributary of the Paria River. You need a permit to hike through this canyon, and there is a high risk of flash floods 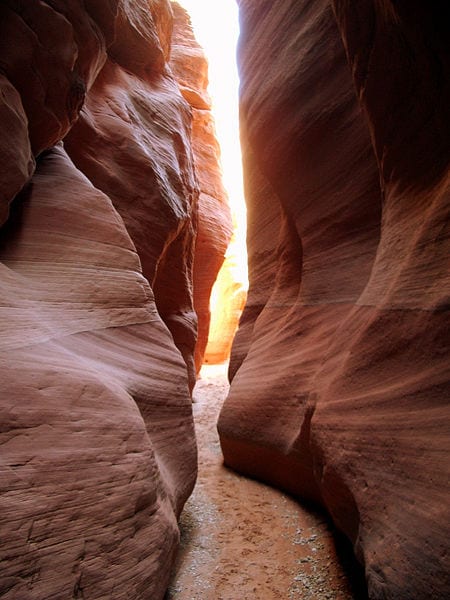 This slot canyon is located in the Bungle Bungles Range of the Purnululu National Park. This canyon is so large, you could wander around it for days without seeing the same thing twice. It is part of a series of amphitheaters and slot canyons that are wound together, and it is one of the most spectacular sights in the park 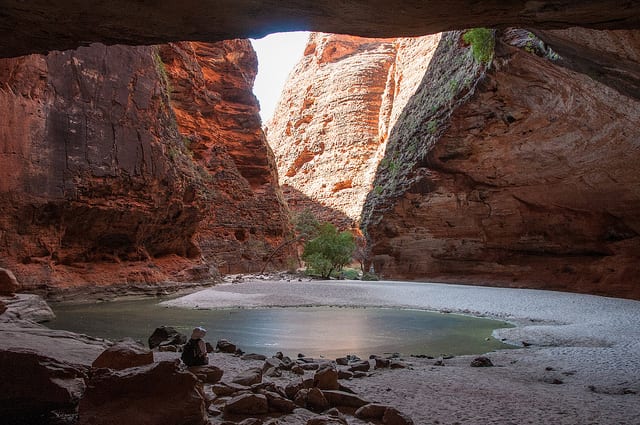 Located near Wisconsin Dells, this emerald colored slot canyon was discovered by a photographer in 1871. A boardwalk has been built inside the canyon to ease the way of travelers through the beautiful canyon. In some places the path is so narrow, it’s possible to touch both walls of the gorge at the same time 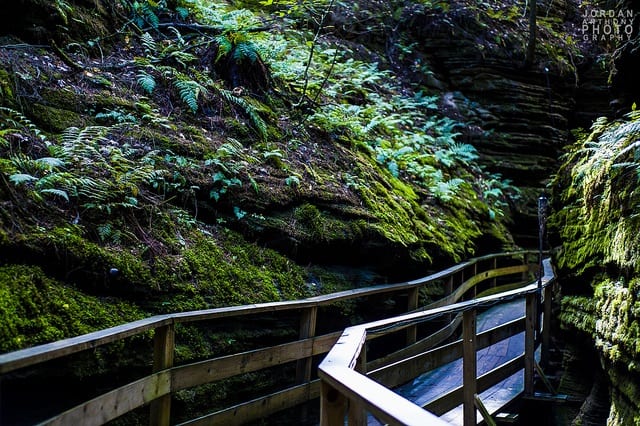 The Blue Mountains of Australia are home to many slot canyons, and in Karijini National Park you will find a slot canyon with narrow paths and impressive iron rock formations, and even a beautiful natural pool hidden between the narrow walls – the Handrail Pool. The walls of the Weano Gorge are smooth to the touch and the place is a favorable location for many rock climbers 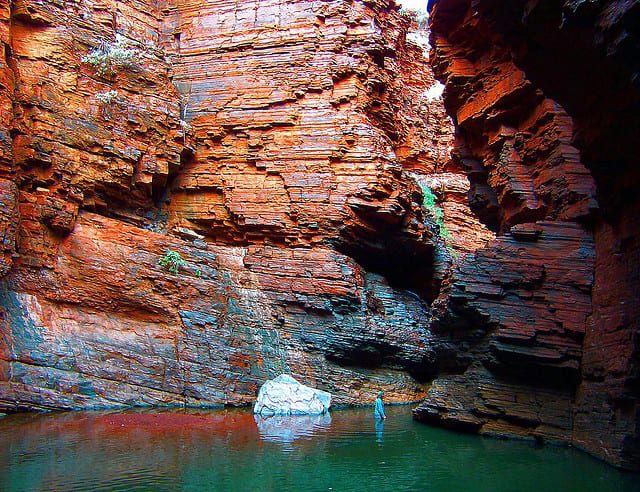 Sinai in Egypt was at one time under the waters of an ocean. During the time that it was underwater layers of beautiful sediment formed, with each layer being different in color and slightly different in texture. When the water and the wind of millions of years had finished forming this slot canyon with 30 meters (100 ft) high walls, they left layers of color up and down those walls. This is a very popular tourist destination 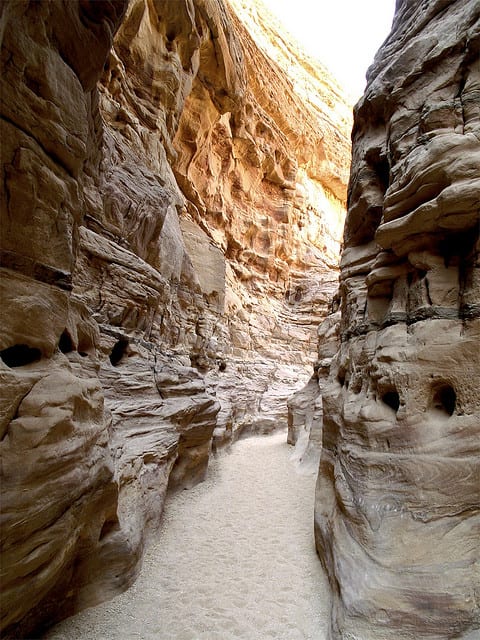