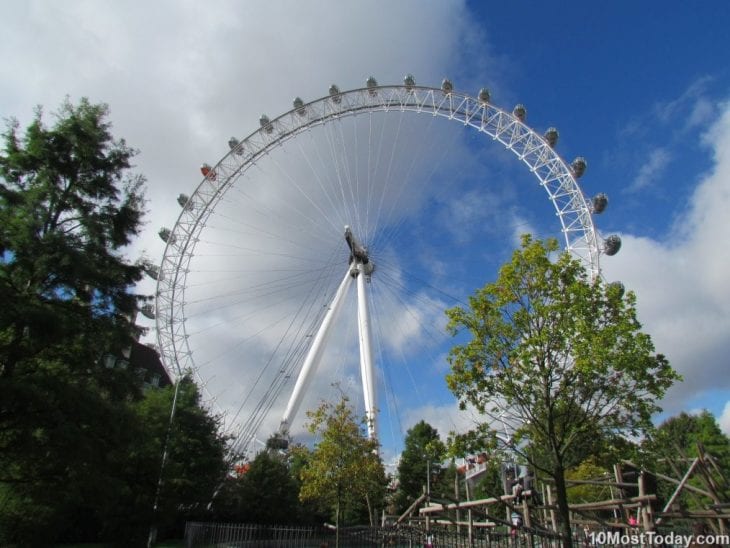 A Ferris wheel, observation wheel or big wheel is a structure consisting of a rotating upright wheel with passenger cars attached to the rim in such a way that as the wheel turns, the cars are kept upright. The original Ferris Wheel was designed and constructed by George Washington Gale Ferris, Jr. as a landmark for the 1893 World’s Columbian Exposition in Chicago. The current tallest Ferris Wheel record holder is the 165-meter (541 ft) Singapore Flyer, which opened to the public in March 2008. 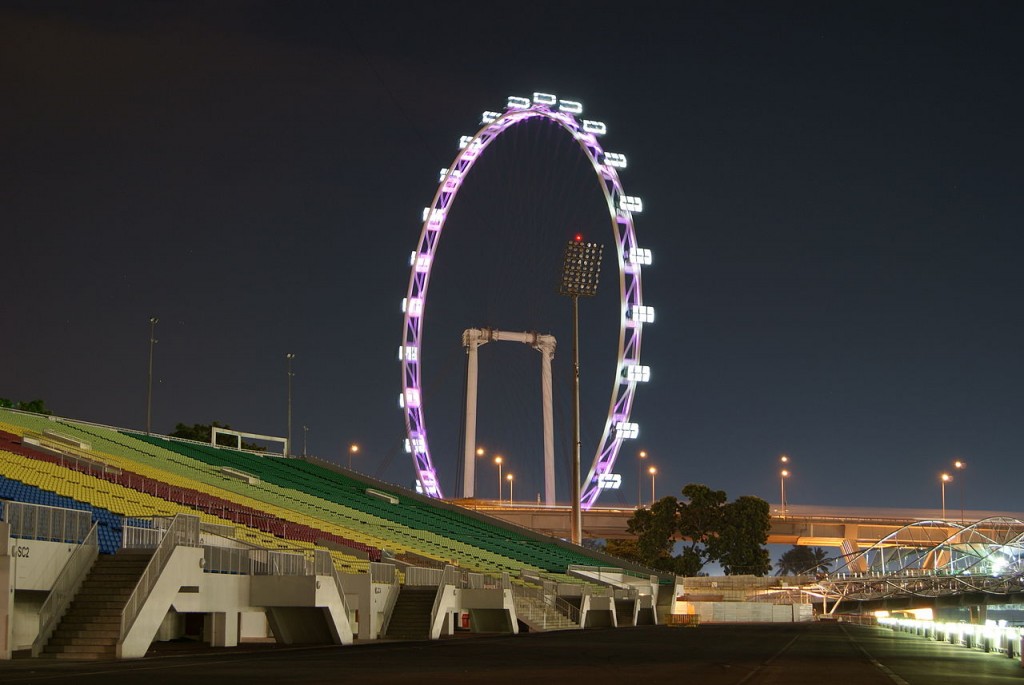 The second tallest Ferris Wheel in the world with a height of 160 meters (525 ft). It is located in the eastern Chinese city of Nanchang. The Star of Nanchang opened in May 2006 as the world’s tallest operating Ferris wheel until the opening of the Singapore Flyer. The Star of Nanchang has 60 gondolas, each carrying up to 8 passengers. A single rotation takes approximately 30 minutes. 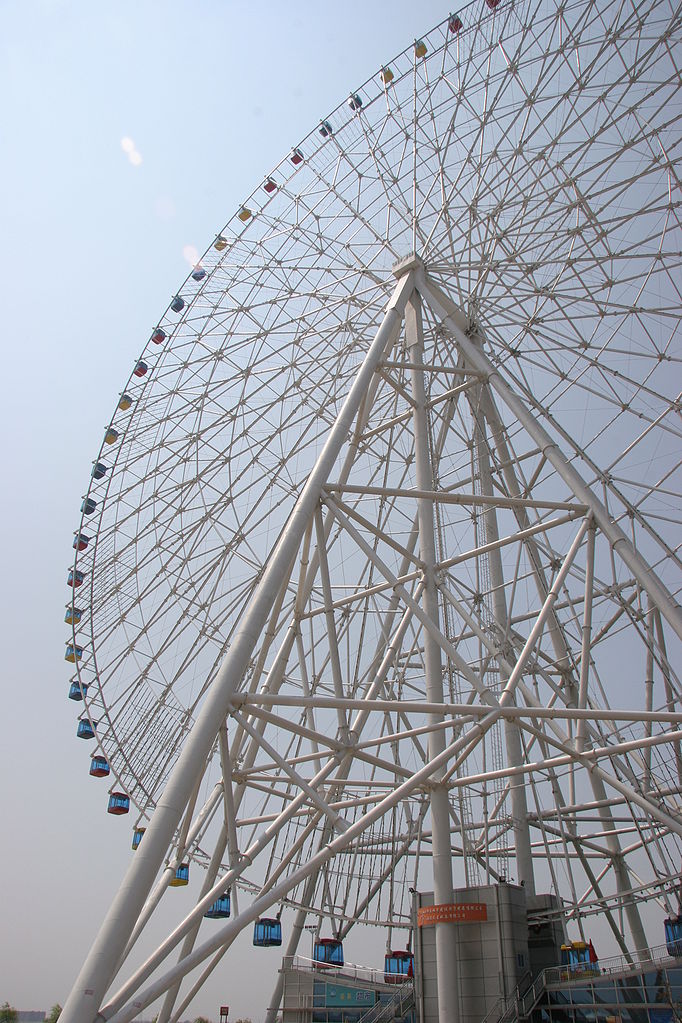 The London Eye (also known as the Millennium Wheel) is a giant Ferris wheel on the South Bank of the River Thames in London. The entire structure is 135 metres (443 ft) tall and the wheel has a diameter of 120 metres (394 ft). It is the third tallest Ferris Wheel in the world and the tallest in Europe. It is visited by over 3.5 million people annually and considered one of the best attractions in London. 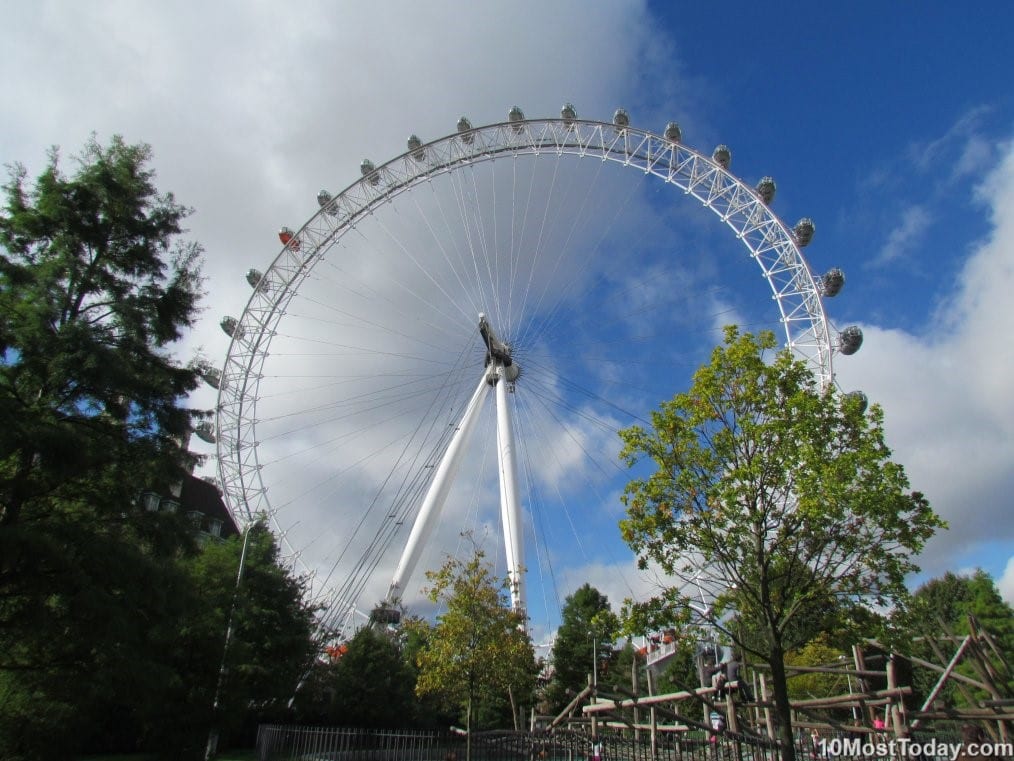 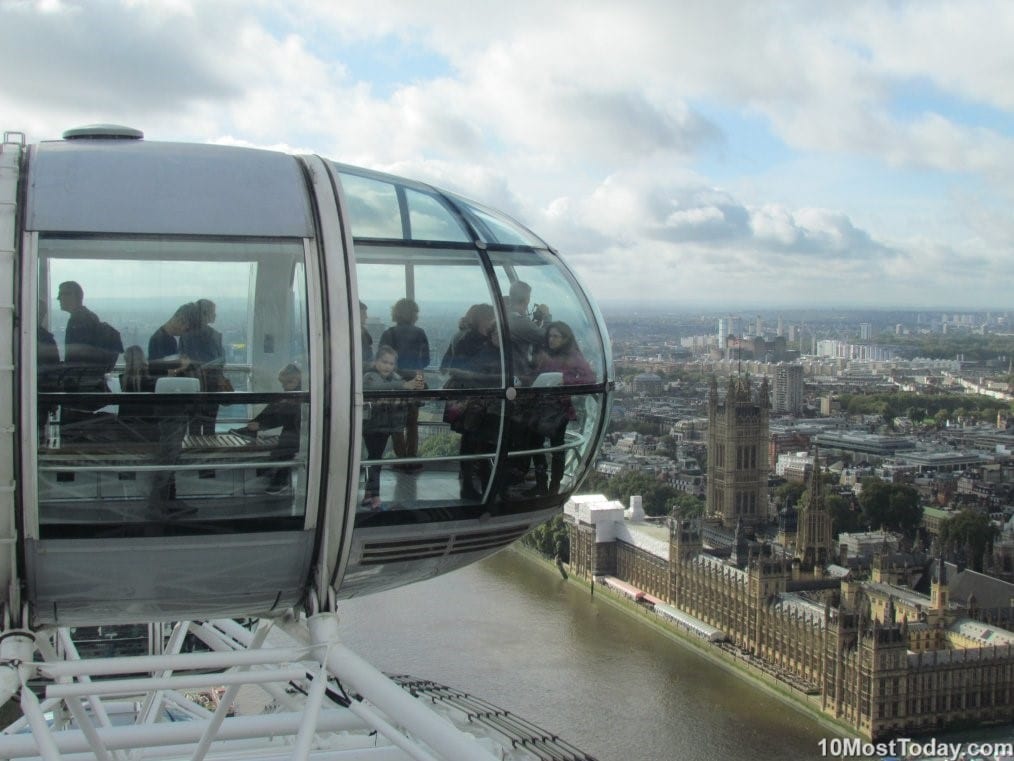 A 115-metre (377 ft) tall Ferris wheel in Tokyo. When it opened in 1999, it was the world’s tallest Ferris wheel. It has the same 1100-meter (328 ft) diameter as its world record predecessor, the Tempozan Ferris Wheel, at Osaka, but its overall height is 2.5 meters (8.2 ft) greater. It is the third tallest Ferris wheel ever constructed in Japan. 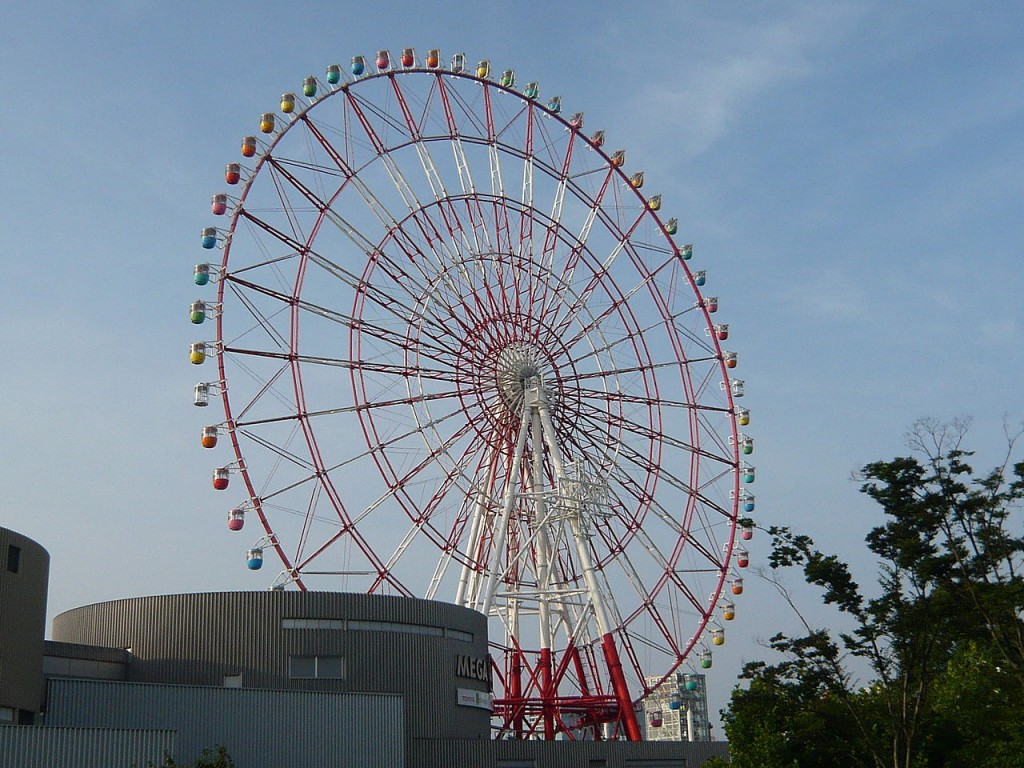 Located in Osaka, next to Osaka Aquarium Kaiyukan. The wheel has a height of 112.5 meters (369 ft) and diameter of 100 meters (330 ft). It opened to the public on July 12, 1997. During its 17 minutes ride, it offers a view of Osaka Bay and surrounding areas. The wheel has colored lights that provide a weather forecast for the next day. Orange lights indicate a sunny day, green lights a cloudy day and blue lights indicate rain. 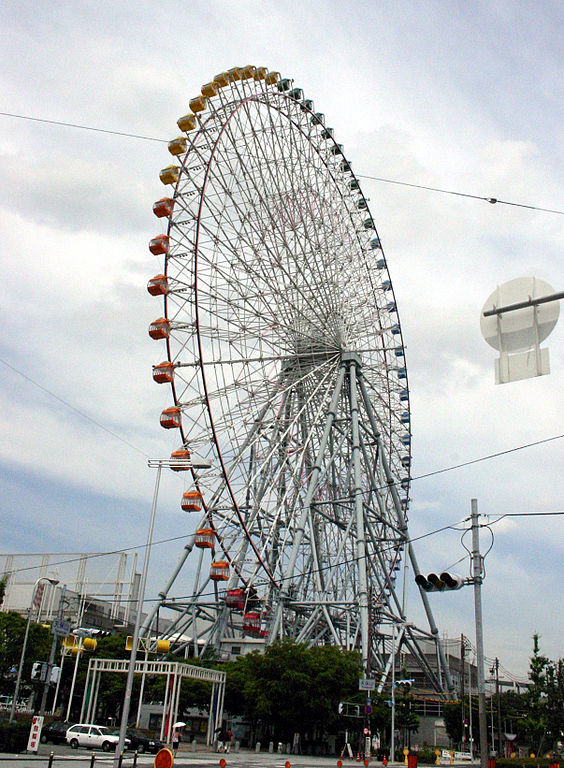 A giant Ferris wheel located at Yokohama Cosmo World in Yokohama, Japan. It is also the world’s largest clock. When it first opened, it was the world’s tallest Ferris wheel, until the completion of the 112.5-meter (369 ft) Tempozan Ferris Wheel in Osaka in 1997. 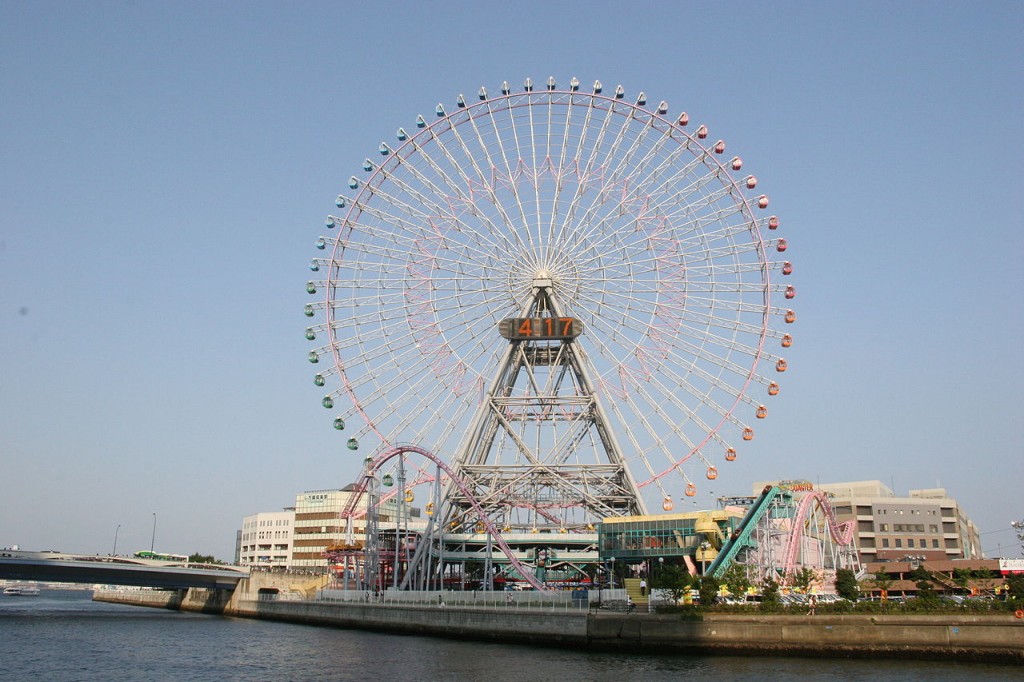 Also known as the Southern Star, it is currently a nonoperational Ferris wheel in Melbourne, Australia. It is 120 m (394 ft) tall and has seven spokes, reflecting the seven-pointed star of the Australian flag. It opened two years behind schedule in December 2008, but then closed 40 days later due to structural defects, and was subsequently dismantled for major repairs. Reconstruction began in January 2011 and was originally scheduled to be completed by the end of that year, but this and several subsequent completion date estimates were missed. In January 2013, the wheel’s owner, ING, advised that it will not re-open until the second half of 2013. 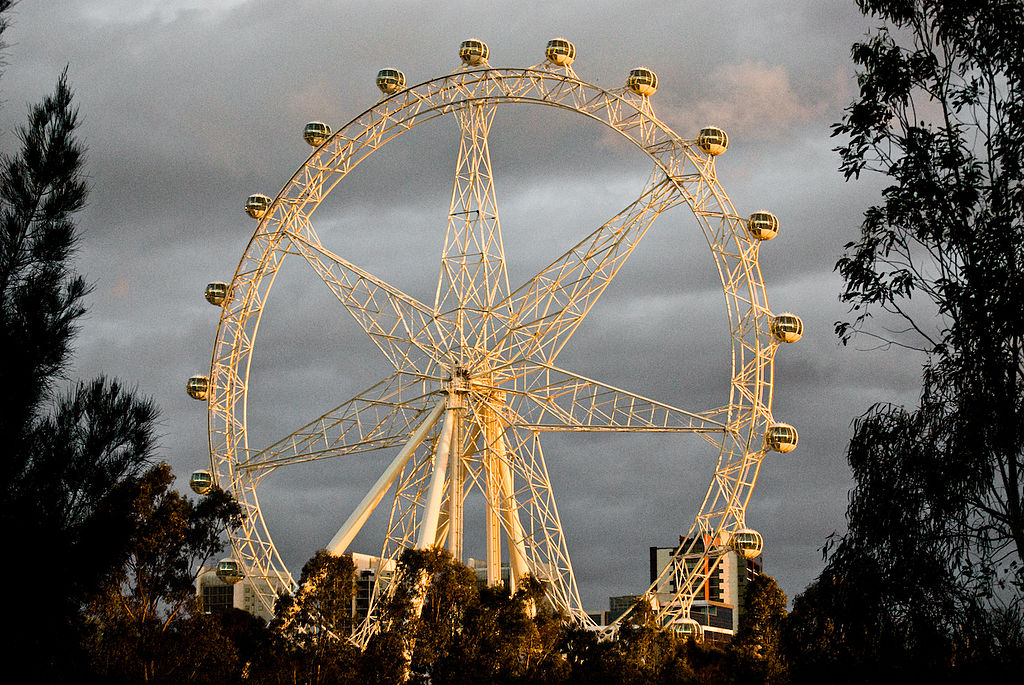 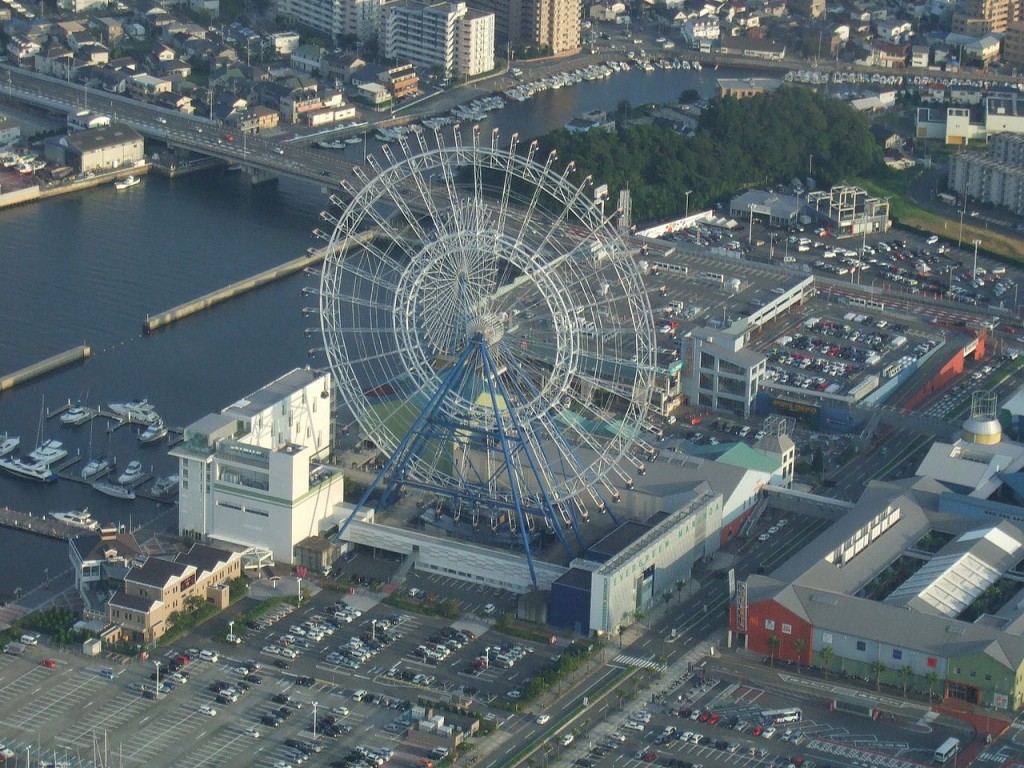 A 120-metre (394 ft) tall Ferris wheel on the east bank of Jinji Lake in Suzhou. It has 60 passenger cabins, a maximum capacity of 300 passengers, and takes approximately 20 minutes to complete each revolution. It was completed and opened to the public in 2009 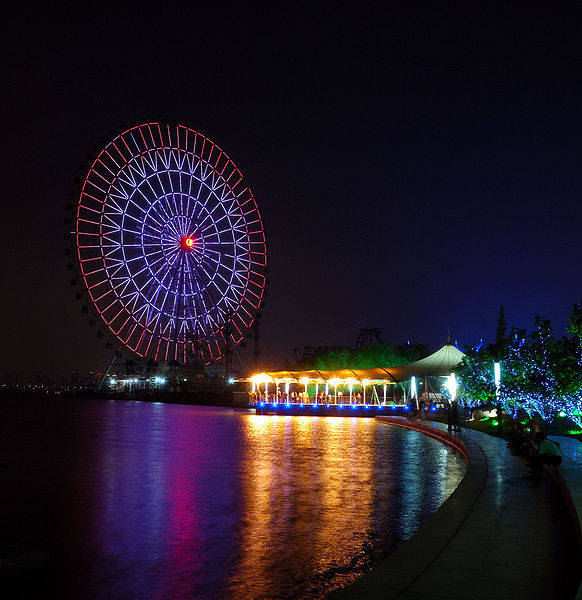 A 90-meter (300 ft) tall Ferris wheel at the Mirabilandia amusement park in Emilia–Romagna, Italy. It is famous for its spectacular views over Ravenna and nearby beaches and its 50,000 light bulbs are said to make it the brightest Ferris wheel in the world. Eurowheel is now Europe’s second tallest extant Ferris wheel, after the London Eye 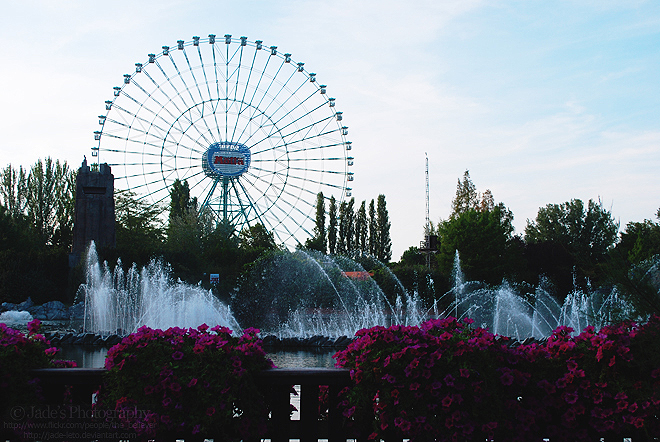