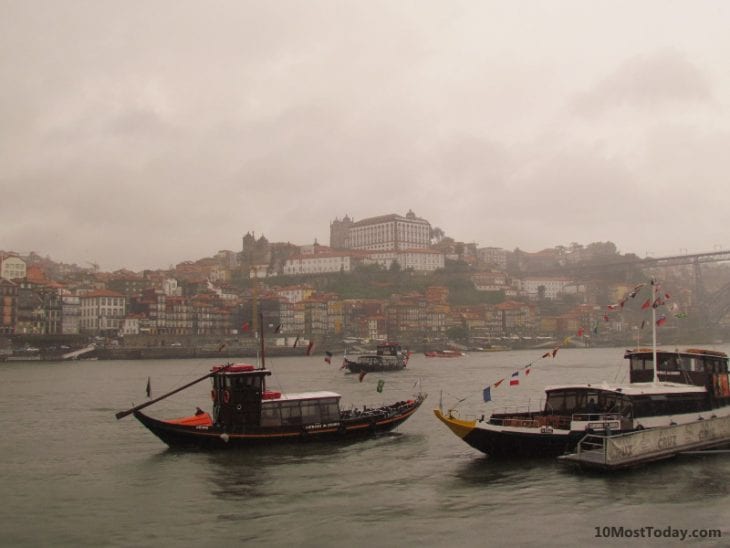 Porto or Oporto is the second largest city in Portugal, after the capital Lisbon. Located in Northern Portugal, It sits on the mouth of the Douro river, just before the river ends at the Atlantic Ocean. The city has a rich history that you will encounter wherever you go. Porto is also home to the world famous Port Wine, which is also one of the attractions of the city. Porto is a beautiful city and a great place to spend a few days. Here’s a list of some of the top attractions the city has to offer.

The Torre dos Clérigos or Clérigos Tower is the 18th century bell tower of the Clérigos Church, located at the heart of the city. The 76 meters (249 ft) tower can be seen from almost anywhere in the city and is one of its symbols. Visitors can climb up the narrow staircase of the tower all the way to the top, and enjoy a breathtaking view of the city of Porto with its red rooftops, the large cathedral and the Douro river. 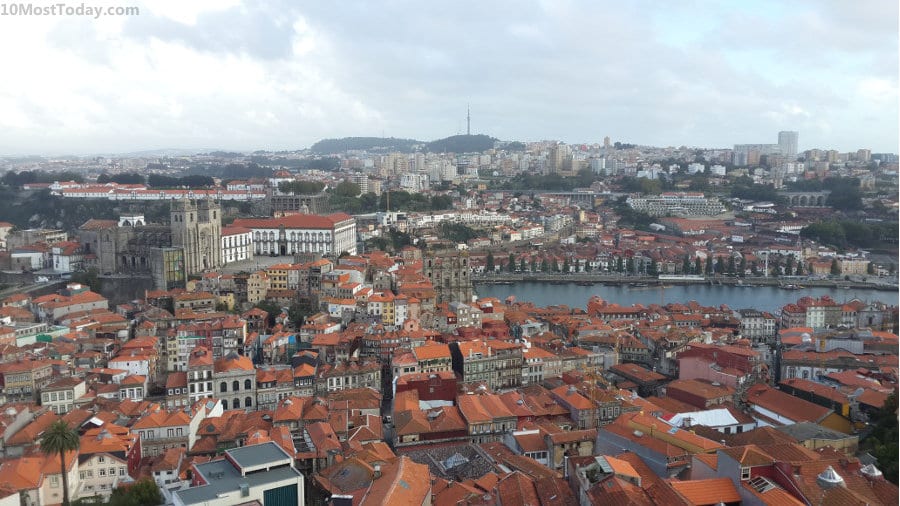 The view from the Torre dos Clérigos, towards the Douro river and the Porto Cathedral 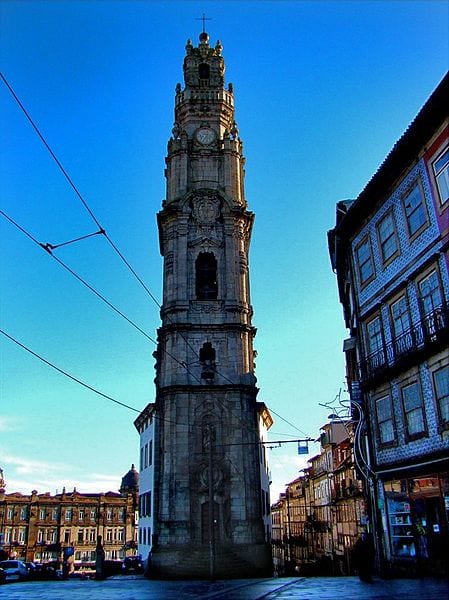 The Port wine is produced exclusively by grapes grown in the Douro Valley. You can’t visit Porto without visiting the Port cellars where the Port wine is ageing. You’ll enjoy a wonderful tour with knowledgeable guides that will answer all your questions, and of course – you’ll get to taste the Port. All the cellars are located at the Cais De Gaia area, across the river on the southern part of the city, and most of them are located on the banks of the Douro river itself. There are many different cellars, and I can recommend on Graham’s Port and Taylor’s 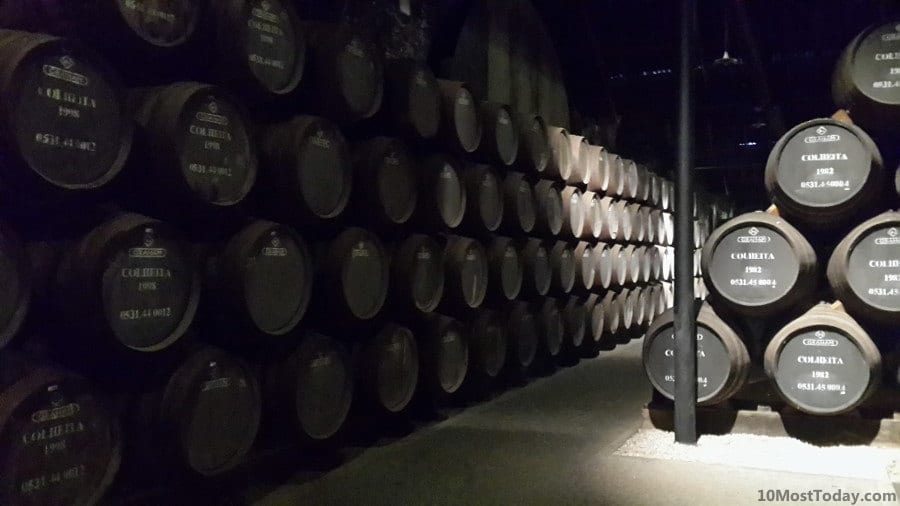 The Port cellars of Graham’s Port 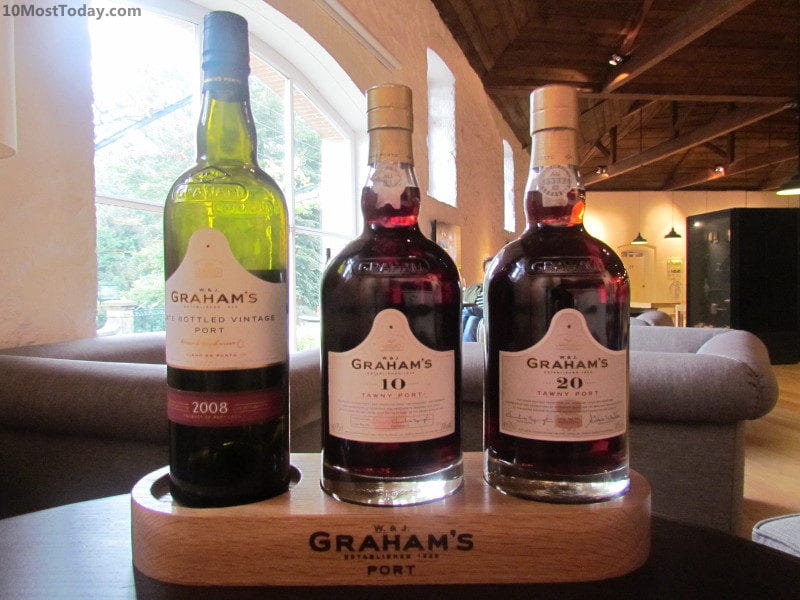 Cais De Gaia is not just the home of the Port cellars. It stands as a wonderful attraction by itself. The walkway on the banks of the Douro offers a remarkable panoramic view of the skyline of Porto. The river is filled with old and new boats crossing up and down the river, and behind them the Ribeira – the densely built historical center of the city, a UNESCO world heritage site. From Cais De Gaia you also have a great view over the impressive Dom Luís bridge, that opened as early as 1886. Along the banks you’ll find several restaurants and cafes where you can enjoy a meal while admiring the view

The Ribeira is the historical district of Porto and a UNESCO world heritage site. The area is made up of densely built medieval streets and narrow alleyways, that end near the river. The houses are old and many of them are in a bad shape, which gives the ton and the atmosphere to the area. The heart of the Ribeira is the Praça da Ribeira, or the Ribeira Square. The square is surrounded by buildings on 3 fronts and opened only to the river, and is home to many restaurants, bars and cafes. The atmosphere in the ancient square is wonderful and a favorite place among tourists 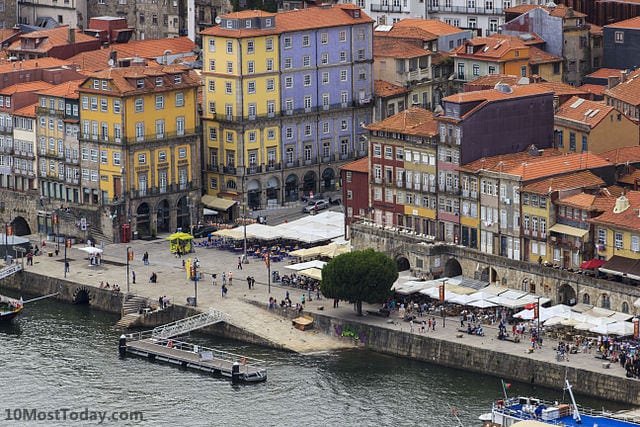 Visiting the Port cellars in the city only gives you part of the story of the Port wine, because the actual vineyards are located in the Douro Valley itself. From Porto you can visit the sunny valley with a rental car, or take a guided tour or a boat cruise into the valley. There are many single day tours you can take, but longer multiple day tours are also available 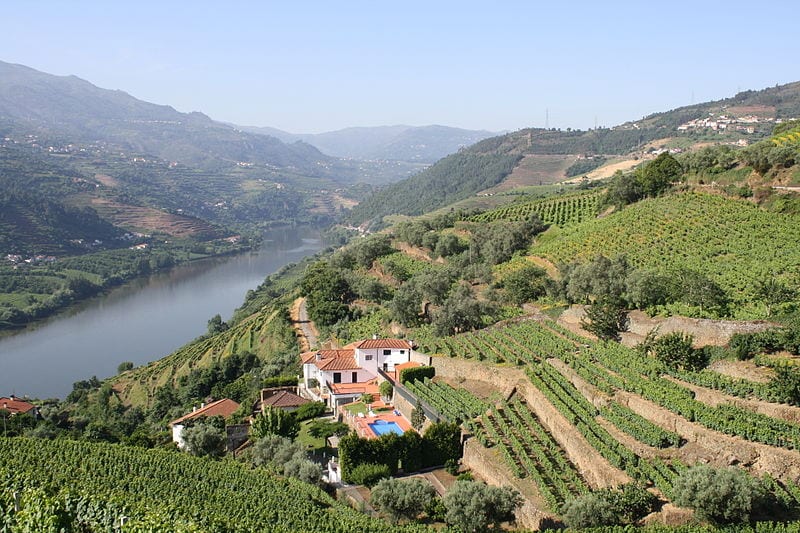 The Porto Cathedral is located in the historical center of the city and is one of the city’s oldest monuments. The construction began around 1110 and was completed only in the 13th century, but the external facade we see today was changed dramatically during the 18th century. The large cathedral is a prominent monument in the skyline of Porto 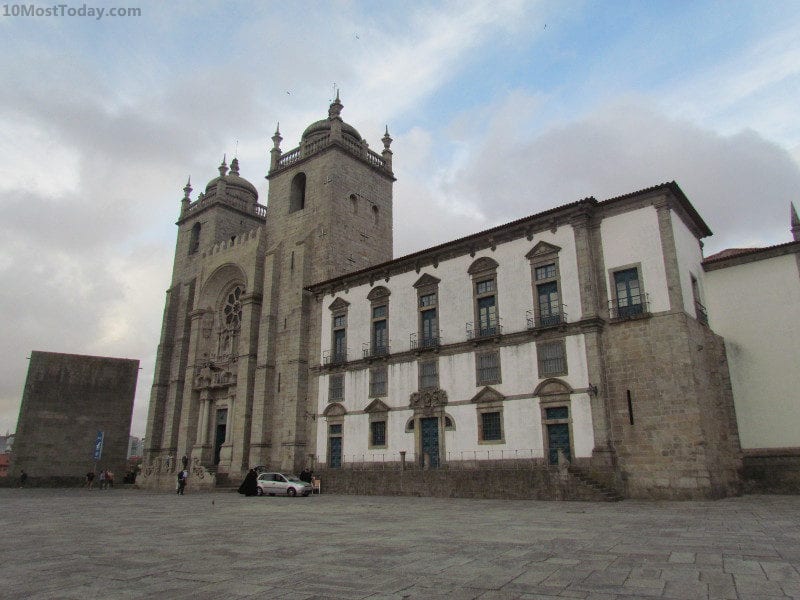 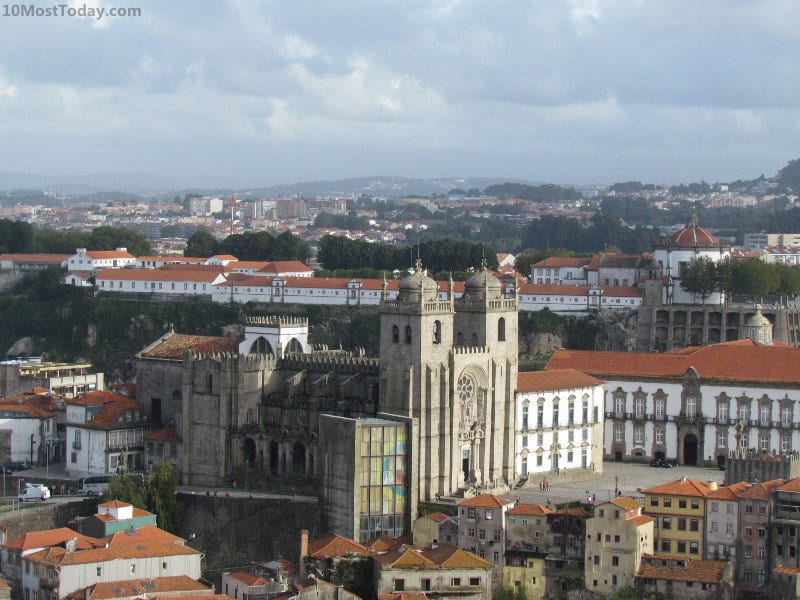 Livraria Lello & Irmão, or simply Lello is a bookstore located not far to the Torre dos Clérigos. First opened in the late 19th century, it is one of the oldest bookstores in Portugal. Lonely Planet named Lello as the third best bookstore in the world, and the store is best known for its beautiful architecture, and specifically the staircases. Lello gained its world recognition after J.K. Rowling, who lived in Porto teaching English in the early 1990s, said that Harry Potter’s library in Hogwarts was inspired by the architecture of Lello. The small bookstore is always packed with visitors and taking photos is forbidden 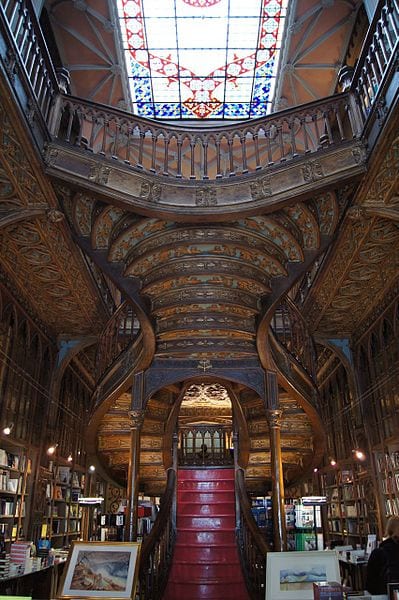 The Soares dos Reis museum was established in 1833 as Portugal’s first national museum. The museum holds a large collection of Portuguese art from the 16th to the 20th centuries, including a large gallery of works by the Portuguese sculptor António Soares dos Reis, after whom the museum is named. This art museum is known as one of the best in the country 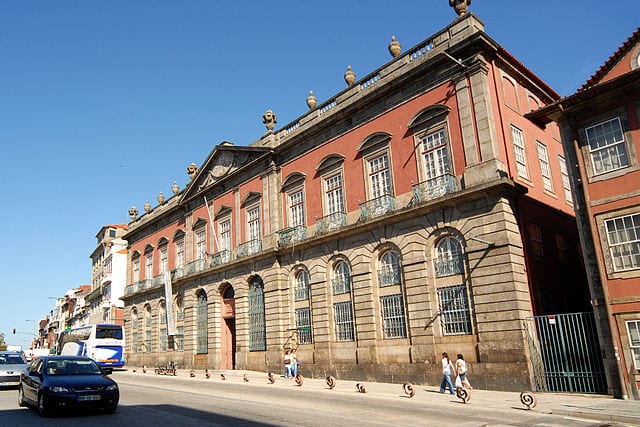 The most famous cafe in Porto and perhaps in Portugal is well worth a visit. With a beautiful exterior and remarkable vintage interior, the Café Majestic opened its doors in 1921, and managed to keep the 20’s look & feel throughout the years. The original Art Nouveau design with marble floors, big Flemish mirrors and carved wood chairs will throw you back in time to Porto of simpler times. J.K. Rowling didn’t miss this spot in Porto either, and it is said that she worked on the draft of Harry Potter and the Philosopher’s Stone in the Café Majestic. Click here for the formal site of the Café 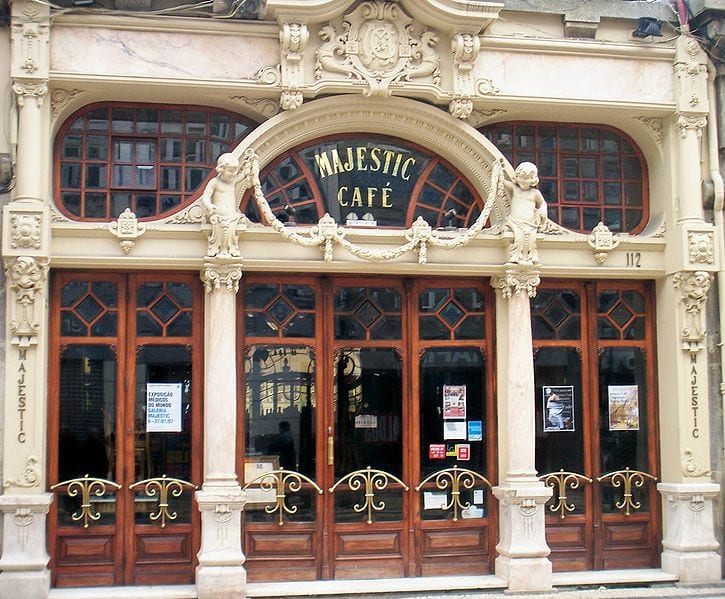 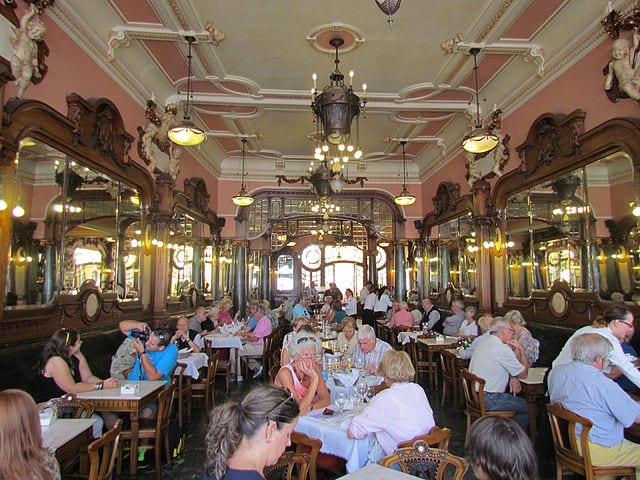 A 19th century building built by the Commercial Association as the stock exchange. The Palácio da Bolsa is located in the historic heart of the city, close to the cathedral. The beautiful interior is divided to several rooms (like Tribunal Room, Assembly Room, Golden Room, Arab room) and salons, each has a unique style and designed by different architects. This building will surely fascinate architecture, art and history lovers 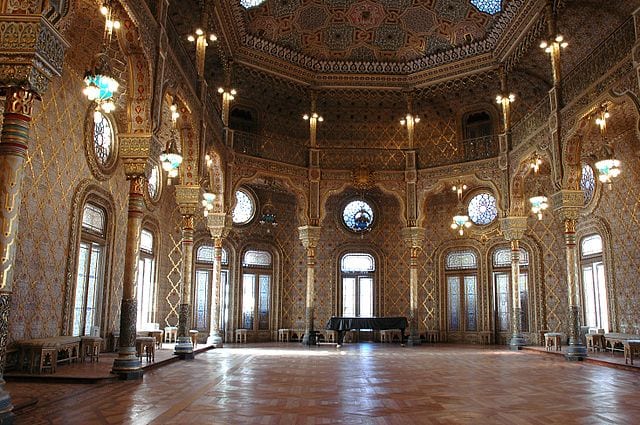